The House An Episode in the Lives of Reuben Baker, Astronomer, and of His Wife, Alice 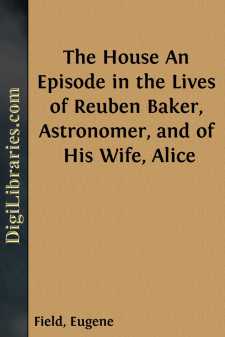 WE BUY A PLACE

It was either Plato the Athenian, or Confucius the Chinese, or Andromachus the Cretan—or some other philosopher whose name I disremember—that remarked once upon a time, and the time was many centuries ago, that no woman was happy until she got herself a home. It really makes no difference who first uttered this truth, the truth itself is and always has been recognized as one possessing nearly all the virtues of an axiom.

I recall that one of the first wishes I heard Alice express during our honeymoon was that we should sometime be rich enough to be able to build a dear little house for ourselves. We were poor, of course; otherwise our air castle would not have been "a dear little house"; it would have been a palatial residence with a dance-hall at the top and a wine-cellar at the bottom thereof. I have always observed that when the money comes in the poetry flies out. Bread and cheese and kisses are all well enough for poverty-stricken romance, but as soon as a poor man receives a windfall his thoughts turn inevitably to a contemplation of the probability of terrapin and canvasbacks.

I encouraged Alice in her fond day-dreaming, and we decided between us that the dear little house should be a cottage, about which the roses and the honeysuckles should clamber in summer, and which in winter should be banked up with straw and leaves, for Alice and I were both of New England origin. I must confess that we had some reason for indulging these pleasing speculations, for at that time my Aunt Susan was living, and she was reputed as rich as mud (whatever that may mean), and this simile was by her neighbors coupled with another, which represented Aunt Susan as being as close as a clapboard on a house. Whatever her reputation was, I happened to be Aunt Susan's nearest of kin, and although I never so far lost my presence of mind as to intimate even indirectly that I had any expectations, I wrote regularly to Aunt Susan once a month, and every fall I sent her a box of game, which I told her I had shot in the woods near our boarding-house, but which actually I had bought of a commission merchant in South Water Street.

With the legacy which we were to receive from Aunt Susan, Alice and I had it all fixed up that we should build a cottage like one which Alice had seen one time at Sweet Springs while convalescing at that fashionable Missouri watering-place from an attack of the jaundice. This cottage was, as I was informed, an ingenious combination of Gothic decadence and Norman renaissance architecture. Being somewhat of an antiquarian by nature, I was gratified by the promise of archaism which Alice's picture of our future home presented. We picked out a corner lot in,—well, no matter where; that delectable dream, with its Gothic and Norman features, came to an untimely end all too soon. At its very height Aunt Susan up and died, and a fortnight later we learned that, after bequeathing the bulk of her property to foreign missions, she had left me, whom she had condescended to refer to as her "beloved nephew," nine hundred dollars in cash and her favorite flower-piece in wax, a hideous thing which for thirty years had occupied the corner of honor in the front spare chamber....