The Hound From The North 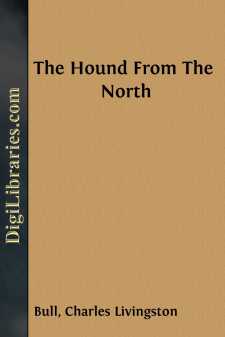 A pallid sun, low, gleaming just over a rampart of mountain-tops. Sundogs––heralds of stormy weather––fiercely staring, like sentries, upon either hand of the mighty sphere of light. Vast glaciers shimmering jewel-like in the steely light of the semi-Arctic evening. Black belts of gloomy pinewoods on the lower slopes of the mountains; the trees snow-burdened, but black with the darkness of night in their melancholy depths. The earth white; snow to the thickness of many feet on all. Life none; not a beast of the earth, nor a fowl of the air, nor the hum of an insect. Solitude. Cold––grey, pitiless cold. Night is approaching.

The hill ranges which backbone the American continent––the northern extremity of the Rocky Mountains. The barrier which confronts the traveller as he journeys from the Yukon Valley to the Alaskan seaboard. Land where the foot of man but rarely treads. And mid-winter.

But now, in the dying light of day, a man comes slowly, painfully into the picture. What an atom in that infinity of awful grandeur. One little life in all that desert of snow and ice. And what a life. The poor wretch was swathed in furs; snow-shoes on his feet, and a long staff lent his drooping figure support. His whole attitude told its own tale of exhaustion. But a closer inspection, one glance into the fierce-burning eyes, which glowered from the depths of two cavernous sockets, would have added a sequel of starvation. The eyes had a frenzied look in them, the look of a man without hope, but with still that instinct of life burning in his brain. Every now and again he raised one mitted hand and pressed it to nose and cheeks. He knew his face was frozen, but he had no desire to stop to thaw it out. He was beyond such trifles. His upturned storm-collar had become massed with icicles about his mouth, and the fur was frozen solidly to his chin whisker, but he gave the matter no heed.

The man tottered on, still onward with the dogged persistence which the inborn love of life inspires. He longed to rest, to seat himself upon the snow just where he happened to be, to indulge that craving for sleep which was upon him. His state of exhaustion fostered these feelings, and only his brain fought for him and clung to life. He knew what that drowsy sensation meant. He was slowly freezing. To rest meant sleep––to sleep meant death.

Slowly he dragged himself up the inclining ledge he was traversing. The path was low at the base of one of the loftiest crags. It wound its way upwards in such a fashion that he could see little more than fifty yards ahead of him ere it turned away to the left as it skirted the hill. He was using his last reserve of strength, and he knew it. At the top he stood half dazed. The mountain rose sheer up to dizzy heights on one side, and a precipice was on the other. He turned his dreadful eyes this way and that. Then he scanned the prospect before him––a haze of dimly-outlined mountains. He glanced back, tracing his uneven tracks until they disappeared in the grey evening light....