The Horsewoman A Practical Guide to Side-Saddle Riding, 2nd. Ed. 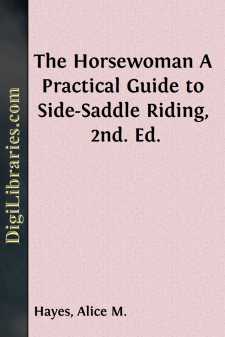 Instruction based on experience assists us in the attainment of all arts, and hastens the process of learning. Although a specially gifted individual who has not been taught, may be able to sing in a pleasing style, no one has ever become an accomplished pianist without competent instruction; the former being somewhat in the position of a man, the latter in that of a lady, as regards riding. In all countries we find good untaught horsemen who have got “shaken into their seats” by constant practice, with or without a saddle, which in most cases is chiefly a protection to the animal’s back. A side-saddle, on the contrary, is as artificial a production as a musical instrument, and a full knowledge of its peculiarities often cannot be acquired during a lifetime. Here the great difference between men and women is that the former ride the horse; the latter, the saddle. The tyranny of the side-saddle would not be so marked as it is, if this article of gear were of a uniform pattern of the best possible kind. Unfortunately it is generally built according to the fantastic ideas of fashionable makers who have no practical experience of side-saddle riding. Unaided learners have such difficulty in acquiring security and grace of seat and good hands, that many ladies who have ridden all their lives, and have lots of pluck, are poor performers, particularly in the hunting-field. A beginner who is put on a properly made saddle and suitable horse, and is taught the right principles of riding, will make more progress in a month than she would otherwise do in, say, five years. The artificiality of side-saddle riding extends even to the horse, which must be free from certain faults, such as unsteadiness in mounting, that would not render him unsuitable to carry a male rider.

Competency in the instructor is of the first importance. Nothing is more absurd than for a man who cannot ride well in a side-saddle, to try to unfold to a lady the mysteries of seat. Such men, instead of getting into a side-saddle and showing their pupils “how to do it,” generally attempt to conceal their ignorance by the use of stock phrases. If asked “Why?” they invariably reply, “Because it’s the right thing to do,” or words to that effect. I have never heard of women venturing to teach men how to ride.

Davis, a young groom we had, was a rare instance of a man who was thoroughly competent to teach ladies how to ride, because he had lots of practice in side saddles, and had ample opportunities of learning the theory of the art, while I was teaching pupils in a riding school, where I rode and jumped horses without a skirt. shows Davis riding in a side saddle over a gate, on my grey horse Gustave. The fact of his not hanging on to the horse’s head is a good proof that he had a strong seat.

Fig. 1.—Man riding a horse over a fence in a side-saddle.

The first lessons in balance and grip should be given by a competent horsewoman, and the riding-skirt should either be taken off or pinned back (for instance, with a safety-pin), in order that the lady instructor may be able to see and at once correct faults in the position of the legs, which is hardly a task fit for a man, even were he competent to perform it. After the pupil has acquired a good seat at the various paces and over small fences, her further education in the guidance and control of her mount might be entrusted to a competent horseman, preferably to a good cross-country rider, and not, as is frequently the case, to an ex-military riding-master, who, having been taught that a cavalryman’s right hand has to be occupied with a sword or lance, considers that ladies should also adopt the one-handed system of riding! As a rule, the services of a good horseman are desirable when the pupil is fit to ride in the open, because he is more helpful than a lady rider in rendering prompt assistance on an emergency....