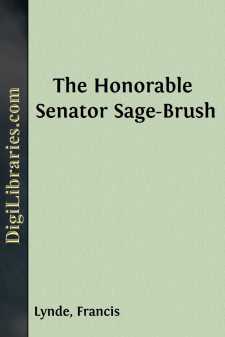 I BECAUSE PATRICIA SAID "NO"

Some one was giving a dinner dance at the country club, and Blount, who was a week-end guest of the Beverleys, was ill-natured enough to be resentful. What right had a gay and frivolous world to come and thrust its light-hearted happiness upon him when Patricia had said "No"? It was like bullying a cripple, he told himself morosely, and when he had read the single telegram which had come while he was at dinner he begged Mrs. Beverley's indulgence and went out to find a chair in a corner of the veranda where the frivolities had not as yet intruded.

It was a North Shore night like that in which Shakespeare has mingled moon-shadows with the gossamer fantasies of the immortal "Dream." Though the dance was in-doors, the trees on the lawn and the road-fronting verandas of the club-house were hung with festoons of Chinese lanterns. At the carriage-entrance smart automobiles were coming and going, and one of them, with the dust of the Boston parkways on its running-gear, brought the guests of honor—three daughters of a Western senator lately home from their summer abroad.

Blount knew neither the honorers nor the honored ones, and had resolutely refused the chance offered him by Mrs. Beverley to amend his ignorance. For Patricia's "No" was not yet twenty-four hours old, and since it had changed the stars in their courses for Patricia's lover, the cataclysm was much too recent to postulate anything like a return of the heavenly bodies to their normal orbits.

Not that Blount put it that way, either to Mrs. Beverley or to himself. He was a level-eyed, square-shouldered young man of an up-to-date world, and the stock from which he sprang was prosaic and practical rather than poetic or sentimental. But the fact remained, and when he sat back in his corner absently folding the lately received telegram into a narrow spill and scowling moodily down upon the coming and going procession of motor-cars he was unconsciously giving a very life-like imitation of the disappointed lover the world over.

It was thus, and apparently by the merest chance, that Gantry found him; a chance because the Winnebasset club-house is spacious and the dinner dance minimized the hazards of a meeting between two unattached men who were merely transient guests. But the railroad man at least was unfeignedly glad.

"Doesn't it beat the dickens what a little world this is?" he exclaimed, with a true bromidian disregard for the outworn and the axiomatic. "Of course, I knew you were in or around Boston somewhere, but to run slap up against you here, when there seemed to be nothing in it for me but to be bored stiff—" He stopped short, finding it difficult to be shiftily insincere with as old a friend as Evan Blount. But in the nature of things it was baldly impossible to tell Blount that the meeting was not accidental.

"Pull up a chair and sit down," said Blount, not too ungraciously, considering his just cause to be more ungracious. "I was thinking of you a little while ago, Dick. I saw your name in the list of Transcontinental representatives to the traffic meeting in Boston, and—well, at the present moment I'm not sure but you are the one man in the world I wanted most to meet."

"Say! that sounds pretty good to me," laughed Gantry, settling himself comfortably in a lazy-chair and feeling in his pockets for a cigar. "I've been in Boston the full week, skating around over the chilly crust of things and never able to get so much as one tenuous little social claw-hold....