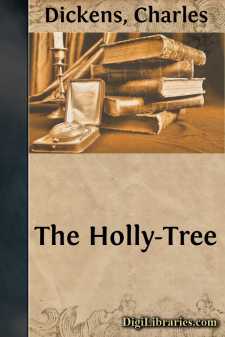 That object is to give a plain account of my travels and discoveries in the Holly-Tree Inn; in which place of good entertainment for man and beast I was once snowed up.

It happened in the memorable year when I parted for ever from Angela Leath, whom I was shortly to have married, on making the discovery that she preferred my bosom friend.  From our school-days I had freely admitted Edwin, in my own mind, to be far superior to myself; and, though I was grievously wounded at heart, I felt the preference to be natural, and tried to forgive them both.  It was under these circumstances that I resolved to go to America—on my way to the Devil.

Communicating my discovery neither to Angela nor to Edwin, but resolving to write each of them an affecting letter conveying my blessing and forgiveness, which the steam-tender for shore should carry to the post when I myself should be bound for the New World, far beyond recall,—I say, locking up my grief in my own breast, and consoling myself as I could with the prospect of being generous, I quietly left all I held dear, and started on the desolate journey I have mentioned.

The dead winter-time was in full dreariness when I left my chambers for ever, at five o’clock in the morning.  I had shaved by candle-light, of course, and was miserably cold, and experienced that general all-pervading sensation of getting up to be hanged which I have usually found inseparable from untimely rising under such circumstances.

How well I remember the forlorn aspect of Fleet Street when I came out of the Temple!  The street-lamps flickering in the gusty north-east wind, as if the very gas were contorted with cold; the white-topped houses; the bleak, star-lighted sky; the market people and other early stragglers, trotting to circulate their almost frozen blood; the hospitable light and warmth of the few coffee-shops and public-houses that were open for such customers; the hard, dry, frosty rime with which the air was charged (the wind had already beaten it into every crevice), and which lashed my face like a steel whip.

It wanted nine days to the end of the month, and end of the year.  The Post-office packet for the United States was to depart from Liverpool, weather permitting, on the first of the ensuing month, and I had the intervening time on my hands.  I had taken this into consideration, and had resolved to make a visit to a certain spot (which I need not name) on the farther borders of Yorkshire.  It was endeared to me by my having first seen Angela at a farmhouse in that place, and my melancholy was gratified by the idea of taking a wintry leave of it before my expatriation.  I ought to explain, that, to avoid being sought out before my resolution should have been rendered irrevocable by being carried into full effect, I had written to Angela overnight, in my usual manner, lamenting that urgent business, of which she should know all particulars by-and-by—took me unexpectedly away from her for a week or ten days....