The History of the Rise, Progress and Accomplishment of the Abolition of the African Slave Trade by the British Parliament (1808) Volume II 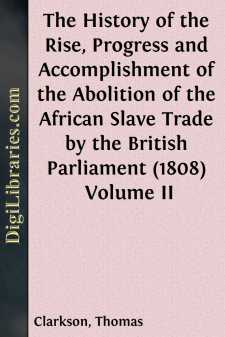 Continuation from June 1788 to July 1789—Author travels to collect further evidence—great difficulties in obtaining it—forms committees on his tour—Privy council resume the examinations—inspect cabinet of African productions—obliged to leave many of the witnesses in behalf of the abolition unexamined—prepare their report—Labours of the committee in the interim—Proceedings of the planters and others—Report laid on the table of the House of Commons—Introduction of the question, and debate there—twelve propositions deduced from the report and reserved for future discussion—day of discussion arrives—opponents refuse to argue from the report—require new evidence—this granted and introduced—further consideration of the subject deferred to the next session—Renewal of Sir William Dolben's bill—Death and character of Ramsay.

Matters had now become serious. The gauntlet had been thrown down and accepted. The combatants had taken their stations, and the contest was to be renewed, which was to be decided soon on the great theatre of the nation. The committee by the very act of their institution had pronounced the Slave-trade to be criminal. They, on the other hand, who were concerned in it, had denied the charge. It became the one to prove, and the other to refute it, or to fall in the ensuing session.

The committee, in this perilous situation, were anxious to find out such other persons, as might become proper evidences before the privy council. They had hitherto sent there only nine or ten, and they had then only another, whom they could count upon for this purpose, in their view. The proposal of sending persons to Africa, and the West Indies, who might come back and report what they had witnessed, had been already negatived. The question then was, what they were to do. Upon this they deliberated, and the result was an application to me to undertake a journey to different parts of the kingdom for this purpose.

When this determination was made I was at Teston, writing a long letter to the privy council on the ill usage and mortality of the seamen employed in the Slave-trade, which it had been previously agreed should be received as evidence there. I thought it proper, however, before I took my departure, to form a system of questions upon the general subject. These I divided into six tables. The first related to the productions of Africa, and the disposition and manners of the natives. The second, to the methods of reducing them to slavery. The third, to the manner of bringing them to the ships, their value, the medium of exchange, and other circumstances. The fourth, to their transportation. The fifth, to their treatment in the Colonies. The sixth, to the seamen employed in the trade. These tables contained together one hundred and forty-five questions. My idea was that they should be printed on a small sheet of paper, which should be folded up in seven or eight leaves, of the length and breadth of a small almanac, and then be sent in franks to our different correspondents....