The History of the Rise, Progress and Accomplishment of the Abolition of the African Slave Trade by the British Parliament (1808), Volume I 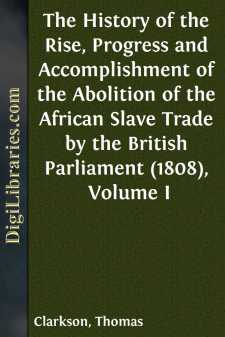 No subject more pleasing than that of the removal of evils—Evils have existed almost from the beginning of the world—but there is a power in our nature to counteract them—this power increased by Christianity—of the evils removed by Christianity one of the greatest is the Slave-trade—The joy we ought to feel on its abolition from a contemplation of the nature of it—and of the extent of it—and of the difficulty of subduing it—Usefulness also of the contemplation of this subject.

I scarcely know of any subject, the contemplation of which, is more pleasing than that of the correction or of the removal of any of the acknowledged evils of life; for while we rejoice to think that the sufferings of our fellow-creatures have been thus, in any instance, relieved, we must rejoice equally to think that our own moral condition must have been necessarily improved by the change.

That evils, both physical and moral, have existed long upon earth there can be no doubt. One of the sacred writers, to whom we more immediately appeal for the early history of mankind, informs us that the state of our first parents was a state of innocence and happiness; but that, soon after their creation, sin and misery entered into the world. The Poets in their fables, most of which, however extravagant they may seem, had their origin in truth, speak the same language. Some of these represent the first condition of man by the figure of the golden, and his subsequent degeneracy and subjection to suffering by that of the silver, and afterwards of the iron, age. Others tell us that the first female was made of clay; that she was called Pandora, because every necessary gift, qualification, or endowment, was given to her by the Gods, but that she received from Jupiter at the same time, a box, from which, when opened, a multitude of disorders sprung, and that these spread themselves immediately afterwards among all of the human race. Thus it appears, whatever authorities we consult, that those which may be termed the evils of life existed in the earliest times. And what does subsequent history, combined with our own experience, tell us, but that these have been continued, or that they have come down, in different degrees, through successive generations of men, in all the known countries of the universe, to the present day?

But though the inequality visible in the different conditions of life, and the passions interwoven into our nature, (both which have been allotted to us for wise purposes, and without which we could not easily afford a proof of the existence of that which is denominated virtue,) have a tendency to produce vice and wretchedness among us, yet we see in this our constitution what may operate partially as preventives and correctives of them. If there be a radical propensity in our nature to do that which is wrong, there is on the other hand a counteracting power within it, or an impulse, by means of the action of the Divine Spirit upon our minds, which urges us to do that which is right....