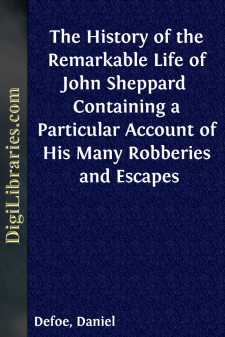 TO THE CITIZENSOFLondon and Westminster.

Experience has confirm'd you in that everlasting Maxim, that there is no other way to protect the Innocent, but by Punishing the Guilty.

Crimes ever were, and ever must be unavoidably frequent in such populous Cities as yours are, being the necessary Consequences, either of the Wants, or the Depravity, of the lowest part of the humane Species.

At this time the most flagrant Offences, as Burning of Dwellings; Burglaries, and Highway Robberies abound; and Frauds common Felonies, and Forgeries are practic'd without Number; thus not only your Properties, but even your very Lives are every way struck at.

The Legislative Power has not been wanting in providing necessary and wholesome Laws against these Evils, the executive part whereof (according to your great Privileges) is lodged in your own Hands: And the Administration hath at all times applyed proper Remedies and Regulations to the Defects which have happen'd in the Magistracy more immediately under their Jurisdiction.

Through the just and salutary Severities of the Magistrates, publick excessive Gaming has been in a manner Surpress'd; and some late Examples of divine Vengeance have overtaken certain of the most notorious lewd Prostitutes of the Town, which together with the laudable endeavours of the great and worthy Societies, has given no small check to that enormous and spreading Vice.

But here's a Criminal bids Defiance to your Laws, and Justice who declar'd and has manifested that the Bars are not made that can either keep him Out, or keep him In, and accordingly hath a second time fled from the very Bosom Of Death.

His History will astonish! and is not compos'd of Fiction, Fable, or Stories plac'd at York, Rome, or Jamaica, but Facts done at your Doors, Facts unheard of, altogether new, Incredible, and yet Uncontestable.

He is gone once more upon his wicked Range in the World. Restless Vengeance is pursuing, and Gentlemen 'tis to be hoped that she will be assisted by your Endeavours to bring to Justice this notorious Offender.

This John Sheppard, a Youth both in Age and Person, tho' an old Man in Sin; was Born in the Parish of Stepney near London, in the Year 1702, a Son, Grandson, and great Grandson of a Carpenter: His Father died when he was so very Young that he could not recollect that ever he saw him. Thus the burthen of his Maintenance, together with his Brother's and Sister's, lay upon the Shoulders of the Widow Mother, who soon procured an Admittance of her Son John into the Work-House in Bishopsgate-street, where he continued for the space of a Year and half, and in that time received an Education sufficient to qualifie him for the Trade his Mother design'd him, viz. a Carpenter: Accordingly she was recommended to Mr. Wood in Witch-Street near Drury-Lane, as a Master capable of entertaining and instructing her Son: They agreed and Bound he was for the space of seven Years; the Lad proved an early proficient, had a ready and ingenious Hand, and soon became Master of his Business, and gave entire Satisfaction to his Master Customers, and had the Character of a very sober and orderly Boy....