The History of Tasmania, Volume I 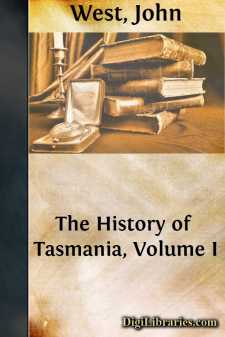 Nearly fifty years have elapsed, since Van Diemen's Land was numbered with the colonies of the British empire. A generation has risen up and is passing away. Thousands, while they venerate the land of their European ancestors, with an amiable fondness love Tasmania as their native country. They will, hereafter, guide its affairs, extend its commerce, and defend its soil; and, not inferior in virtue and intelligence, they will fill an important position in the vast system of Australasia.

To gratify their curiosity, and offer to their view the instructive and inspiriting events of the past, is the purpose of this history.

The difficulty of the task can be appreciated only by experience. To collect from scattered records, facts worthy of remembrance; to separate reality from romance; to remove partial coloring from statements made long ago; and to exhibit useful truth without disguise and without offence, required much research and deliberation.

It is not the intention of this history to relate every event which, when passing, may have been deemed momentous; much less to recal from obscurity the errors, absurdity, and wickedness which exercised no distinct influence on the common welfare. The author has endeavoured to realize the feelings and sympathies of the benevolent and just of another age, and to confine his pen to details which may maintain their interest, when the passions with which they were associated shall subside for ever.

In calling this work The History of Tasmania, a designation is chosen generally preferred by the colonists, and which their successors will certainly adopt. "Van Diemen" is a name affixed to the north coast of New Holland; and this country is the first known discovery of Tasman.

The name of Tasman is recognised by the royal patent constituting the diocese; by several literary societies and periodical works: it forms the term by which we distinguish our Tasmanian from our European youth.

Tasmania is preferred, because "Van Diemen's Land" is associated among all nations with the idea of bondage and guilt; and, finally, because while Tasmania is a melodious and simple sound, "Van Diemen" is harsh, complex, and infernal.

During the reign of Charles I. (Frederick Henry, grandfather of William III. being Stadtholder of Holland) the Dutch discovered this island. The enterprise of that people had raised them to the zenith of their power: unless by England, they were unrivalled in nautical science and commercial opulence. More for the purposes of trade than the acquisition of knowledge, they were anxious to discover unknown countries, and to conceal the information they possessed from the rest of the world.

At this time, Anthony Van Diemen was governor-general of Batavia: by him, Abel Jans Tasman was commissioned to explore the "Great South Land," the name by which New Holland was known until 1665, when, by the authority of the Netherland government, it received its present designation. A fragment of the journal of Tasman, containing an account of his discovery, was first published by Dirk Rembrant, and afterwards translated into most European tongues....