The History of Sir Richard Whittington 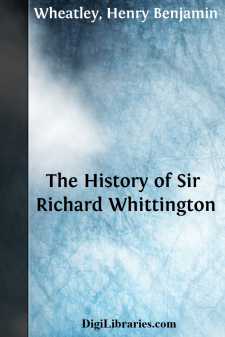 The popular story of Whittington and his Cat is one in which a version of a wide-spread folk-tale has been grafted upon the history of the life of an historical character, and in the later versions the historical incidents have been more and more eliminated. The three chief points in the chap-book story are, 1, the poor parentage of the hero; 2, his change of mind at Highgate Hill by reason of hearing Bow Bells; and, 3, his good fortune arising from the sale of his cat. Now these are all equally untrue as referring to the historical Whittington, and the second is apparently an invention of the eighteenth century. When the Rev. Canon Lysons wrote his interesting and valuable work entitled The Model Merchant he showed the incorrectness of the first point by tracing out Whittington's distinguished pedigree, but he was loath to dispute the other two. It is rather strange that neither Mr. Lysons nor Messrs. Besant and Rice appear to have seen the work which I now present to my readers, which is the earliest form of the life of Whittington known to exist. This is printed from the copy in the Pepysian Library, a later edition of which, with a few typographical alterations, will be found in the British Museum library. This History will be found to differ very considerably from the later and better-known story, which appears to have been written early in the eighteenth century. A comparison between the latter which I print at the end of this Preface (p. xxix.) with T. H.'s earlier text will not, I think, be found unprofitable. The Famous and Remarkable History here reprinted is undated, but was probably published about 1670; the later edition in the British Museum is dated 1678. One passage on page 7—"The merchant went then to the Exchange, which was then in Lumber-street, about his affairs"—seems to show that it was originally written quite early in the century, and it is just possible that T. H. stands for the voluminous playwright and pamphleteer Thomas Heywood. The Exchange was removed to its present site in 1568, and therefore our tract could not have been written before that date, but must have appeared when the memory of the old meeting-place was still fresh in public memory. On page 11 it will be seen that Whittington, when discontented with his position in Fitzwarren's house, set out before day-break on All Hallows-day with his clothes in a bundle, in order to seek his fortune elsewhere. He had only got as far as Bunhill when he heard Bow bells ring out what appeared to be—

These words took complete possession of him, and he returned before it was known that he had run away. In the more modern chap-book Whittington is made to reach Holloway, where it would be less easy to hear Bow bells, and from which place he would have found it more difficult to return before the cook had risen. As far as I can find there is no allusion to Holloway or Highgate hill in any early version, and it is evident that this localization is quite modern. Mr. Lysons is certainly wrong when he says that at Highgate "a stone continued to mark the spot for many centuries." It is not known when the stone was first erected there, but it was probably put up when the name of the place was first foisted into the tale. One stone was taken away in 1795, but others have succeeded it, and now there is a Whittington Stone Tavern; and the situation of Whittington College, which was removed to Highgate in 1808, has helped to favour the supposition that Whittington himself was in some way connected with that place.

The form of invitation which the bells rung out varies very much in the different versions.

which is then amplified into—

"Turn againe, Whittington,For thou in time shall growLord Maior of London."

In the later chap-book version this is altered into—

It will be seen that the special reference to the fact that Whittington was three times Lord Mayor is not to be found in either the ballads or the chap-books....