The History of Samuel Titmarsh and the Great Hoggarty Diamond 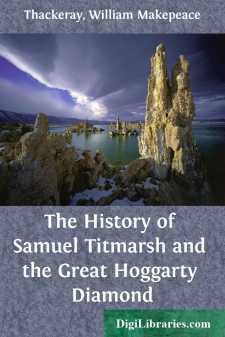 When I came up to town for my second year, my aunt Hoggarty made me a present of a diamond-pin; that is to say, it was not a diamond-pin then, but a large old-fashioned locket, of Dublin manufacture in the year 1795, which the late Mr. Hoggarty used to sport at the Lord Lieutenant’s balls and elsewhere.  He wore it, he said, at the battle of Vinegar Hill, when his club pigtail saved his head from being taken off,—but that is neither here nor there.

In the middle of the brooch was Hoggarty in the scarlet uniform of the corps of Fencibles to which he belonged; around it were thirteen locks of hair, belonging to a baker’s dozen of sisters that the old gentleman had; and, as all these little ringlets partook of the family hue of brilliant auburn, Hoggarty’s portrait seemed to the fanciful view like a great fat red round of beef surrounded by thirteen carrots.  These were dished up on a plate of blue enamel, and it was from the Great Hoggarty Diamond (as we called it in the family) that the collection of hairs in question seemed as it were to spring.

My aunt, I need not say, is rich; and I thought I might be her heir as well as another.  During my month’s holiday, she was particularly pleased with me; made me drink tea with her often (though there was a certain person in the village with whom on those golden summer evenings I should have liked to have taken a stroll in the hayfields); promised every time I drank her bohea to do something handsome for me when I went back to town,—nay, three or four times had me to dinner at three, and to whist or cribbage afterwards.  I did not care for the cards; for though we always played seven hours on a stretch, and I always lost, my losings were never more than nineteenpence a night: but there was some infernal sour black-currant wine, that the old lady always produced at dinner, and with the tray at ten o’clock, and which I dared not refuse; though upon my word and honour it made me very unwell.

Well, I thought after all this obsequiousness on my part, and my aunt’s repeated promises, that the old lady would at least make me a present of a score of guineas (of which she had a power in the drawer); and so convinced was I that some such present was intended for me, that a young lady by the name of Miss Mary Smith, with whom I had conversed on the subject, actually netted me a little green silk purse, which she gave me (behind Hicks’s hayrick, as you turn to the right up Churchyard Lane)—which she gave me, I say, wrapped up in a bit of silver paper.  There was something in the purse, too, if the truth must be known.  First there was a thick curl of the glossiest blackest hair you ever saw in your life, and next there was threepence: that is to say, the half of a silver sixpence hanging by a little necklace of blue riband.  Ah, but I knew where the other half of the sixpence was, and envied that happy bit of silver!

The last day of my holiday I was obliged, of course, to devote to Mrs....