The History of Pendennis 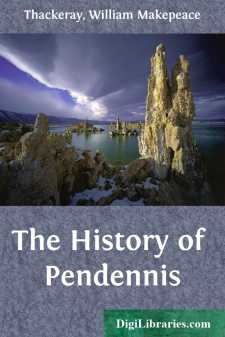 If this kind of composition, of which the two years' product is now laid before the public, fail in art, as it constantly does and must, it at least has the advantage of a certain truth and honesty, which a work more elaborate might lose. In his constant communication with the reader, the writer is forced into frankness of expression, and to speak out his own mind and feelings as they urge him. Many a slip of the pen and the printer, many a word spoken in haste, he sees and would recall as he looks over his volume. It is a sort of confidential talk between writer and reader, which must often be dull, must often flag. In the course of his volubility, the perpetual speaker must of necessity lay bare his own weaknesses, vanities, peculiarities. And as we judge of a man's character, after long frequenting his society, not by one speech, or by one mood or opinion, or by one day's talk, but by the tenor of his general bearing and conversation; so of a writer, who delivers himself up to you perforce unreservedly, you say, Is he honest? Does he tell the truth in the main? Does he seem actuated by a desire to find out and speak it? Is he a quack, who shams sentiment, or mouths for effect? Does he seek popularity by claptraps or other arts? I can no more ignore good fortune than any other chance which has befallen me. I have found many thousands more readers than I ever looked for. I have no right to say to these, You shall not find fault with my art, or fall asleep over my pages; but I ask you to believe that this person writing strives to tell the truth. If there is not that, there is nothing.

Perhaps the lovers of 'excitement' may care to know, that this book began with a very precise plan, which was entirely put aside. Ladies and gentlemen, you were to have been treated, and the writer's and the publisher's pocket benefited, by the recital of the most active horrors. What more exciting than a ruffian (with many admirable virtues) in St. Giles's, visited constantly by a young lady from Belgravia? What more stirring than the contrasts of society? the mixture of slang and fashionable language? the escapes, the battles, the murders? Nay, up to nine o'clock this very morning, my poor friend, Colonel Altamont, was doomed to execution, and the author only relented when his victim was actually at the window.

The 'exciting' plan was laid aside (with a very honourable forbearance on the part of the publishers), because, on attempting it, I found that I failed from want of experience of my subject; and never having been intimate with any convict in my life, and the manners of ruffians and gaol-birds being quite unfamiliar to me, the idea of entering into competition with M. Eugene Sue was abandoned. To describe a real rascal, you must make him so horrible that he would be too hideous to show; and unless the painter paints him fairly, I hold he has no right to show him at all.

Even the gentlemen of our age—this is an attempt to describe one of them, no better nor worse than most educated men—even these we cannot show as they are, with the notorious foibles and selfishness of their lives and their education....