The History of Minnesota and Tales of the Frontier 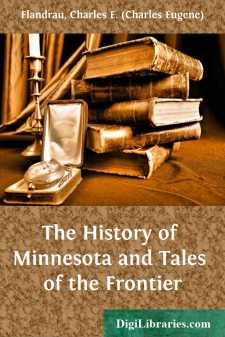 It has been a little over fifty years since the organization of the Territory of Minnesota, which at its birth was a very small and unimportant creation, but which in its half century of growth has expanded into one of the most brilliant and promising stars upon the union of our flag; so that its history must cover every subject, moral, physical and social, that enters into the composition of a first-class progressive Western state, which presents a pretty extensive field; but there is also to be considered a period anterior to civilization, which may be called the aboriginal and legendary era, which abounds with interesting matter, and to the general reader is much more attractive than the prosy subjects of agriculture, finance and commerce.

Having lived in the state through nearly the whole period of Minnesota's political existence, and having taken part in most of the leading events in her history, both savage and civilized, I propose to treat the various subjects that compose her history in a narrative and colloquial manner that may not rise to the dignity of history, but which, I think, while giving facts, will not detract from the interest or pleasure of the reader. If I should in the course of my narrative so far forget myself as to indulge in a joke, or relate an illustrative anecdote, the reader must put up with it.

Nature has been lavishly generous with Minnesota,—more so, perhaps, than with any state in the Union. Its surface is beautifully diversified between rolling prairies and immense forests of valuable timber. Rivers and lakes abound, and the soil is marvelous in its productive fertility. Its climate, taken the year round, surpasses in all attractive features that of any part of the North American continent. There are more enjoyable days in the three hundred and sixty-five that compose the year than in any other country I have ever visited or resided in, and that embraces a good part of the world's surface. The salubrity of Minnesota is phenomenal. There are absolutely no diseases indigenous to the state. The universally accepted truth of this fact is found in a saying, which used to be general among the old settlers, "that there is no excuse for anyone dying in Minnesota, and that only two men ever did die there, one of whom was hanged for killing the other."

The resources of Minnesota principally consist of the products of the farm, the mine, the dairy, the quarry and the forest, and its industries of a vast variety of manufactures of all kinds and characters, both great and small, the leading ones being flour and lumber; to which, of course, must be added the enormous carrying trade which grows out of, and is necessary to the successful conduct of such resources and industries,—all of which subjects will be treated of in their appropriate places.

With these prefatory suggestions I will proceed to the history, beginning with the

Until a very few years ago it has been generally accepted as a fact that Louis Hennepin, a Franciscan priest of the Recollect Order, was the first white man who entered the present boundaries of Minnesota; but a recent discovery has developed the fact that there has reposed in the archives of the Bodleian Library and British Museum for more than two hundred years manuscript accounts of voyages made as far back as 1652 by two Frenchmen, named respectively Radison and Groselliers, proving that they traveled among the North American Indians from the last named date to the year 1684, during which time they visited what is now Minnesota. It is also a well authenticated fact that Du Luth anticipated Hennepin at least one year, and visited Mille Lacs in 1679, and there, on the southwest side of the lake, found a large Sioux town, called Kathio, from which point he wrote to Frontenac, on the second day of July, 1679, that he had caused his majesty's arms to be planted in Kathio, where no Frenchman had ever been. Hennepin did not arrive until 1680. But as the exploits of these earlier travelers left no trace that can in any important way influence the history of our state beyond challenging the claim of priority so long enjoyed by Hennepin, I will simply mention the fact of their advent without comment, referring the curious reader for the proof of these matters to the library of the Minnesota Historical Society, where the details can be found....