The History of England in Three Volumes, Vol.I., Part F. From Charles II. to James II. 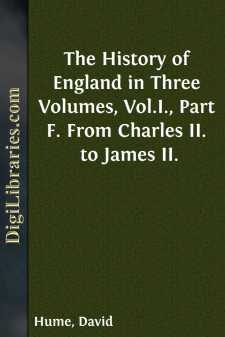 An act was passed for the security of the king's person and government. To intend or devise the king's imprisonment, or bodily harm, or deposition, or levying war against him, was declared, during the lifetime of his present majesty, to be high treason. To affirm him to be a Papist or heretic, or to endeavor by speech or writing to alienate his subjects' affections from him; these offences were made sufficient to incapacitate the person guilty from holding any employment in church or state. To maintain that the long parliament is not dissolved, or that either or both houses, without the king, are possessed of legislative authority, or that the covenant is binding, was made punishable by the penalty of premunire.

The covenant itself, together with the act for erecting the high court of justice, that for subscribing the engagement, and that for declaring England a commonwealth, were ordered to be burnt by the hands of the hangman. The people assisted with great alacrity on this occasion.

The abuses of petitioning in the preceding reign had been attended with the worst consequences; and to prevent such irregular practices for the future, it was enacted that no more than twenty hands should be fixed to any petition, unless with the sanction of three justices, or the major part of the grand jury, and that no petition should be presented to the king or either house by above ten persons. The penalty annexed to a transgression of this law was a fine of a hundred pounds and three months' imprisonment.

The bishops, though restored to their spiritual authority, were still excluded from parliament, by the law which the late king had passed immediately before the commencement of the civil disorders. Great violence, both against the king and the house of peers, had been employed in passing this law; and on that account alone the partisans of the church were provided with a plausible pretence for repealing it. Charles expressed much satisfaction when he gave his assent to the act for that purpose. It is certain that the authority of the crown, as well as that of the church, was interested in restoring the prelates to their former dignity. But those who deemed every acquisition of the prince a detriment to the people, were apt to complain of this instance of complaisance in the parliament.

After an adjournment of some months, the parliament was again assembled, and proceeded in the same spirit as before. They discovered no design of restoring, in its full extent, the ancient prerogative of the crown: they were only anxious to repair all those breaches which had been made, not by the love of liberty, but by the fury of faction and civil war. The power of the sword had in all ages been allowed to be vested in the crown; and though no law conferred this prerogative every parliament, till the last of the preceding reign, had willingly submitted to an authority more ancient, and therefore more sacred, than that of any positive statute. It was now thought proper solemnly to relinquish the violent pretensions of that parliament, and to acknowledge that neither one house nor both houses, independent of the king, were possessed of any military authority. The preamble to this statute went so far as to renounce all right even of defensive arms against the king; and much observation has been made with regard to a concession esteemed so singular. Were these terms taken in their full literal sense, they imply a total renunciation of limitations to monarchy, and of all privileges in the subject, independent of the will of the sovereign. For as no rights can subsist without some remedy, still less rights exposed to so much invasion from tyranny, or even from ambition; if subjects must never resist, it follows that every prince, without any effort, policy, or violence, is at once rendered absolute and uncontrollable; the sovereign needs only issue an edict abolishing every authority but his own; and all liberty from that moment is in effect annihilated....