The History of England in Three Volumes, Vol.I., Part E. From Charles I. to Cromwell 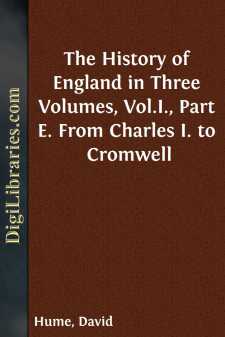 The ill humor of the commons, thus wantonly irritated by the court, and finding no gratification in the legal impeachment of Buckingham, sought other objects on which it might exert itself. The never-failing cry of Popery here served them in stead. They again claimed the execution of the penal laws against Catholics; and they presented to the king a list of persons intrusted with offices, most of them insignificant who were either convicted or suspected recusants.[*] In this particular they had, perhaps, some reason to blame the king's conduct. He had promised to the last house of commons a redress of this religious grievance: but he was apt, in imitation of his father, to imagine that the parliament, when they failed of supplying his necessities, had, on their part, freed him from the obligation of a strict performance. A new odium, likewise, by these representations, was attempted to be thrown upon Buckingham. His mother, who had great influence over him, was a professed Catholic; his wife was not free from suspicion: and the indulgence given to Catholics was of course supposed to proceed entirely from his credit and authority. So violent was the bigotry of the times, that it was thought a sufficient reason for disqualifying any one from holding an office, that his wife, or relations, or companions were Papists, though he himself were a conformist.[**]

It is remarkable, that persecution was here chiefly pushed on by laymen; and that the church was willing to have granted more liberty than would be allowed by the commons. The reconciling doctrines, likewise, of Montague failed not anew to meet with severe censures from that zealous assembly.[***]

The next attack made by the commons, had it prevailed, would have proved decisive. They were preparing a remonstranace against the levying of tonnage and poundage without consent of parliament. This article, together with the new impositions laid on merchandise by James, constituted near half of the crown revenues; and by depriving the king of these resources, they would have reduced him to total subjection and dependence. While they retained such a pledge, besides the supply already promised, they were sure that nothing could be refused them. Though, after canvassing the matter near three ninths, they found themselves utterly incapable of fixing any legal crime upon the duke, they regarded him as an unable, and perhaps a dangerous minister; and they intended to present a petition, which would then have been equivalent to a command, for removing him from his majesty's person and councils.[*]

The king was alarmed at the yoke which he saw prepared for him. Buckingham's sole guilt, he thought, was the being his friend and favorite.[**]

All the other complaints against him were mere pretences. A little before, he was the idol of the people. No new crime had since been discovered. After the most diligent inquiry, prompted by the greatest malice, the smallest appearance of guilt could not be fixed upon him. What idea, he asked, must all mankind entertain of his honor, should he sacrifice his innocent friend to pecuniary considerations? What further authority should he retain in the nation, were he capable, in the beginning of his reign, to give, in so signal an instance, such matter of triumph to his enemies, and discouragement to his adherents? To-day the commons pretend to wrest his minister from him: to-morrow they will attack some branch of his prerogative. By their remonstrances, and promises, and protestations, they had engaged the crown in a war. As soon as they saw a retreat impossible, without waiting for new incidents, without covering themselves with new pretences, they immediately deserted him, and refused him all reasonable supply. It was evident, that they desired nothing so much as to see him plunged in inextricable difficulties, of which they intended to take advantage. To such deep perfidy, to such unbounded usurpations, it was necessary to oppose a proper firmness and resolution. All encroachments on supreme power could only be resisted successfully on the first attempt. The sovereign authority was, with some difficulty, reduced from its ancient and legal height, but when once pushed downwards, it soon became contemptible, and would easily, by the continuance of the same effort, now encouraged by success, be carried to the lowest extremity....