The History of England in Three Volumes, Vol.I., Part D. From Elizabeth to James I. 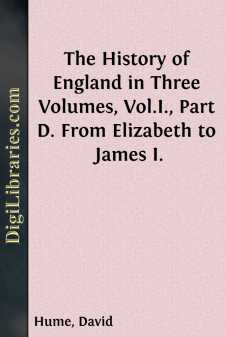 Had the subscribers of this zealous league been content only to demand a toleration of the new opinions, however incompatible their pretensions might have been with the policy of the church of Rome, they would have had the praise of opposing tyrannical laws, enacted to support an establishment prejudicial to civil society: but it is plain that they carried their views much further; and their practice immediately discovered the spirit by which they were actuated. Supported by the authority which they thought belonged to them as the congregation of the Lord, they ordained that prayers in the vulgar tongue[*] should be used in all the parish churches of the kingdom; and that preaching and the interpretation of the Scriptures should be practised in private houses, til God should move the prince to grant public preaching by faithful and true ministers.[**] Such bonds of association are always the fore-runners of rebellion; and this violent invasion of the established religion was the actual commencement of it.

Before this league was publicly known or avowed, the clergy, alarmed with the progress of the reformation, attempted to recover their lost authority by a violent exercise of power, which tended still further to augment the zeal and number of their enemies. Hamilton, the primate, seized Walter Mill, a priest of an irreproachable life, who had embraced the new doctrines; and having tried him at St. Andrew's, condemned him to the flames for heresy. Such general aversion was entertained against this barbarity, that it was some time before the bishops could prevail on any one to act the part of a civil judge, and pronounce sentence upon Mill; and even after the time of his execution was fixed, all the shops of St. Andrew's being shut, no one would sell a rope to tie him to the stake and the primate himself was obliged to furnish this implement. The man bore the torture with that courage which, though usual on these occasions, always appears supernatural and astonishing to the multitude. The people, to express their abhorrence against the cruelty of the priests, raised a monument of stones on the place of his execution; and as fast as the stones were removed by order of the clergy, they were again supplied from the voluntary zeal of the populace.[***] It is in vain for men to oppose the severest punishment to the united motives of religion and public applause; and this was the last barbarity of the kind which the Catholics had the power to exercise in Scotland.

Some time after, the people discovered their sentiments in such a manner as was sufficient to prognosticate to the priests the fate which was awaiting them. It was usual on the festival of St. Giles, the tutelar saint of Edinburgh, to carry in procession the image of that saint; but the Protestants, in order to prevent the ceremony, found means, on the eve of the festival, to purloin the statue from the church; and they pleased themselves with imagining the surprise and disappointment of his votaries. The clergy, however, framed hastily a new image, which in derision was called by the people young St. Giles; and they carried it through the streets, attended by all the ecclesiastics in the town and neighborhood. The multitude abstained from violence so long as the queen regent continued a spectator; but the moment she retired, they invaded the idol, threw it in the mire, and broke it in pieces. The flight and terror of the priests and friars, who, it was remarked, deserted, in his greatest distress, the object of their worship, was the source of universal mockery and laughter.

Encouraged by all these appearances, the congregation proceeded with alacrity in openly soliciting subscriptions to their league; and the death of Mary of England, with the accession of Elizabeth, which happened about this time, contributed to increase their hopes of final success in their undertaking....