The History of England in Three Volumes, Vol.I., Part C. From Henry VII. to Mary 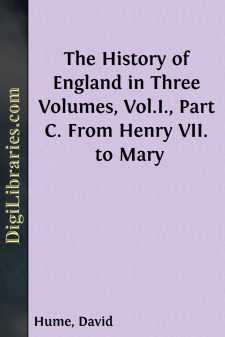 Henry was not ignorant of these intentions of his enemies, and he prepared himself for defence. He ordered troops to be levied in different parts of the kingdom, and put them under the command of the duke of Bedford and earl of Oxford. He confined the marquis of Dorset, who, he suspected, would resent the injuries suffered by his mother, the queen dowager; and, to gratify the people by an appearance of devotion, he made a pilgrimage to our lady of Walsingham, famous for miracles; and there offered up prayers for success, and for deliverance from his enemies.

Being informed that Simnel was landed at Foudrey in Lancashire, he drew together his forces, and advanced towards the enemy as far as Coventry. The rebels had entertained hopes that the disaffected counties in the north would rise in their favor; but the people in general, averse to join Irish and German invaders, convinced of Lambert's imposture, and kept in awe by the king's reputation for success and conduct, either remained in tranquillity, or gave assistance to the royal army. The earl of Lincoln, therefore, who commanded the rebels, finding no hopes but in victory, was determined to bring the matter to a speedy decision; and the king, supported by the native courage of his temper, and emboldened by a great accession of volunteers, who had joined him under the earl of Shrewsbury and Lord Strange, declined not the combat. The hostile armies met at Stoke, in the county of Nottingham, and fought a battle, which was bloody, and more obstinately disputed than could have been expected from the inequality of their force. All the leaders of the rebels were resolved to conquer or to perish; and they inspired their troops with like resolution. The Germans also, being veteran and experienced soldiers, kept the event long doubtful; and even the Irish, though ill-armed and almost defenceless, showed themselves not defective in spirit and bravery. The king's victory was purchased with loss, but was entirely decisive. Lincoln, Broughton, and Swart perished in the field of battle, with four thousand of their followers. As Lovel was never more heard of, he was believed to have undergone the same fate; Simnel, with his tutor, Simon, was taken prisoner. Simon, being a priest, was not tried at law, and was only committed to close custody: Simnel was too contemptible to be an object either of apprehension or resentment to Henry. He was pardoned, and made a scullion in the king's kitchen whence he was afterwards advanced to the rank of a falconer.[*]

Henry had now leisure to revenge himself on his enemies. He made a progress into the northern parts, where he gave many proofs of his rigorous disposition. A strict inquiry was made after those who had assisted or favored the rebels. The punishments were not all sanguinary: the king made his revenge subservient to his avarice. Heavy fines were levied upon the delinquents. The proceedings of the courts, and even the courts themselves, were arbitrary. Either the criminals were tried by commissioners appointed for the purpose, or they suffered punishment by sentence of a court-martial. And as a rumor had prevailed before the battle of Stoke, that the rebels had gained the victory, that the royal army was cut in pieces, and that the king himself had escaped by flight, Henry was resolved to interpret the belief or propagation of this report as a mark of disaffection; and he punished many for that pretended crime. But such in this age was the situation of the English government, that the royal prerogative, which was but imperfectly restrained during the most peaceable periods, was sure, in tumultuous or even suspicious times, which frequently recurred, to break all bounds of law, and to violate public liberty....