The History of England in Three Volumes, Vol.I., Part B. From Henry III. to Richard III. 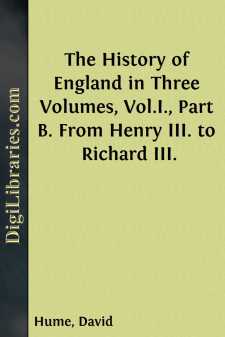 The bishop of Valence, a prelate of the house of Savoy, and maternal uncle to the queen, was his chief minister, and employed every art to amass wealth for himself and his relations. Peter of Savoy, a brother of the same family, was invested in the honor of Richmond, and received the rich wardship of Earl Warrenne; Boniface of Savoy was promoted to the see of Canterbury: many young ladies were invited over to Provence, and married to the chief noblemen of England, who were the king's wards. [*] And, as the source of Henry's bounty began to fail, his Savoyard ministry applied to Rome, and obtained a bull, permitting him to resume all past grants; absolving him from the oath which he had taken to maintain them; even enjoining him to make such a resumption, and representing those grants as invalid, on account of the prejudice which ensued from them to the Roman pontiff, in whom the superiority of the kingdom was vested.[**] The opposition made to the intended resumption prevented it from taking place; but the nation saw the indignities to which the king was willing to submit, in order to gratify the avidity of his foreign favorites. About the same time he published in England the sentence of excommunication, pronounced against the emperor Frederic, his brother-in-law;[***] and said in excuse, that, being the pope's vassal, he was obliged by his allegiance to obey all the commands of his holiness. In this weak reign, when any neighboring potentate insulted the king's dominions, instead of taking revenge for the injury, he complained to the pope as his superior lord, and begged him to give protection to his vassal.[****]

The resentment of the English barons rose high at the preference given to foreigners; but no remonstrance or complaint could ever prevail on the king to abandon them, or even to moderate his attachment towards them. After the Provencals and Savoyards might have been supposed pretty well satiated with the dignities and riches which they had acquired, a new set of hungry foreigners were invited over, and shared among them those favors which the king ought in policy to have conferred on the English nobility, by whom his government could have been supported and defended. His mother Isabella, who had been unjustly taken by the late king from the count de la Marche, to whom she was betrothed, was no mistress of herself by the death of her husband, than she married that nobleman;[*] and she had born him four sons, Guy, William, Geoffrey, and Aymer, whom she sent over to England, in order to pay a visit to their brother. The good-natured and affectionate disposition of Henry was moved at the sight of such near relations; and he considered neither his own circumstances, nor the inclinations of his people, in the honors and riches which he conferred upon them.[**] Complaints rose as high against the credit of the Gascon, as ever they had done against that of the Poictevin and of the Savoyard favorites; and to a nation prejudiced against them, all their measures appeared exceptionable and criminal. Violations of the Great Charter were frequently mentioned; and it is indeed more than probable, that foreigners, ignorant of the laws, and relying on the boundless affections of a weak prince, would, in an age when a regular administration was not any where known, pay more attention to their present interest than to the liberties of the people. It is reported that the Poictevins and other strangers, when the laws were at any time appealed to in opposition to their oppressions, scrupled not to reply, "What did the English laws signify to them? They minded them not." And as words are often more offensive than actions, this open contempt of the English tended much to aggravate the general discontent, and made every act of violence committed by the foreigners appear not only an injury, but an affront to them.[***]

I reckon not among the violations of the Great Charter some arbitrary exertions of prerogative to which Henry's necessities pushed him, and which, without producing any discontent, were uniformly continued by all his successors, till the last century. As the parliament often refused him supplies, and that in a manner somewhat rude and indecent,[****] he obliged his opulent subjects, particularly the citizens of London, to grant him loans of money; and it is natural to imagine that the same want of economy which reduced him to the necessity of borrowing, would prevent him from being very punctual in the repayment.[*****] He demanded benevolences, or pretended voluntary contributions, from his nobility and prelates.[******]