The History of England in Three Volumes, Vol.I., Part A. From the Britons of Early Times to King John 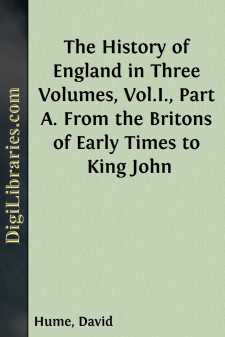 The religion of the Britons was one of the most considerable parts of their government; and the druids, who were their priests, possessed great authority among them. Besides ministering at the altar, and directing all religious duties, they presided over the education of youth; they enjoyed an immunity from wars and taxes; they possessed both the civil and criminal jurisdiction; they decided all controversies among states as well as among private persons, and whoever refused to submit to their decree was exposed to the most severe penalties. The sentence of excommunication was pronounced against him: he was forbidden access to the sacrifices or public worship: he was debarred all intercourse with his fellow-citizens, even in the common affairs of life: his company was universally shunned, as profane and dangerous: he was refused the protection of law:[*] and death itself became an acceptable relief from the misery and infamy to which he was exposed. Thus the bands of government, which were naturally loose among that rude and turbulent people, were happily corroborated by the terrors of their superstition.

No species of superstition was ever more terrible than that of the druids. Besides the severe penalties, which it was in the power of the ecclesiastics to inflict in this world, they inculcated the eternal transmigration of souls; and thereby extended their authority as far as the fears of their timorous votaries. They practised their rites in dark groves or other secret recesses;[*] and in order to throw a greater mystery over their religion, they communicated their doctrines only to the initiated, and strictly forbade the committing of them to writing, lest they should at any time be exposed to the examination of the profane vulgar.

Human sacrifices were practised among them: the spoils of war were often devoted to their divinities; and they punished with the severest tortures whoever dared to secrete any part of the consecrated offering: these treasures they kept in woods and forests, secured by no other guard than the terrors of their religion;[*] and this steady conquest over human avidity may be regarded as more signal than their prompting men to the most extraordinary and most violent efforts. No idolatrous worship ever attained such an ascendant over mankind as that of the ancient Gauls and Britons; and the Romans, after their conquest, finding it impossible to reconcile those nations to the laws and institutions of their masters, while it maintained its authority, were at last obliged to abolish it by penal statutes; a violence which had never, in any other instance, been practised by those tolerating conquerors.[**]

The Britons had long remained in this rude but independent state, when Cæsar, having overrun all Gaul by his victories, first cast his eye on their island. He was not allured either by its riches or its renown; but being ambitious of carrying the Roman arms into a new world, then mostly unknown, he took advantage of a short interval in his Gaulic wars, and made an invasion on Britain. The natives, informed of his intention, were sensible of the unequal contest, and endeavored to appease him by submissions, which, however, retarded not the execution of his design. After some resistance, he landed, as is supposed, at Deal, [Anno ante, C. 55;] and having obtained several advantages over the Britons, and obliged them to promise hostages for their future obedience, he was constrained, by the necessity of his affairs, and the approach of winter, to withdraw his forces into Gaul. The Britons relieved, from the terror of his arms, neglected the performance of their stipulations; and that haughty conqueror resolved next summer to chastise them for this breach of treaty. He landed with a greater force; and though he found a more regular resistance from the Britons, who had united under Cassivelaunus, one of their petty princes, he discomfited them in every action. He advanced into the country; passed the Thames in the face of the enemy; took and burned the capital of Cassivelaunus; established his ally, Mandubratius, in the sovereignty of the Trinobantes; and having obliged the inhabitants to make him new submissions, he again returned with his army into Gaul, and left the authority of the Romans more nominal than real in this island....