The History of England - a Study in Political Evolution

by A. F. (Albert Frederick) Pollard 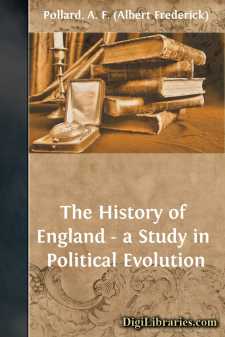 "Ah, well," an American visitor is said to have soliloquized on the site of the battle of Hastings, "it is but a little island, and it has often been conquered." We have in these few pages to trace the evolution of a great empire, which has often conquered others, out of the little island which was often conquered itself. The mere incidents of this growth, which satisfied the childlike curiosity of earlier generations, hardly appeal to a public which is learning to look upon historical narrative not as a simple story, but as an interpretation of human development, and upon historical fact as the complex resultant of character and conditions; and introspective readers will look less for a list of facts and dates marking the milestones on this national march than for suggestions to explain the formation of the army, the spirit of its leaders and its men, the progress made, and the obstacles overcome. No solution of the problems presented by history will be complete until the knowledge of man is perfect; but we cannot approach the threshold of understanding without realizing that our national achievement has been the outcome of singular powers of assimilation, of adaptation to changing circumstances, and of elasticity of system. Change has been, and is, the breath of our existence and the condition of our growth.

Change began with the Creation, and ages of momentous development are shrouded from our eyes. The land and the people are the two foundations of English history; but before history began, the land had received the insular configuration which has largely determined its fortune; and the various peoples, who were to mould and be moulded by the land, had differentiated from the other races of the world. Several of these peoples had occupied the land before its conquest by the Anglo-Saxons, some before it was even Britain. Whether neolithic man superseded palaeolithic man in these islands by invasion or by domestic evolution, we do not know; but centuries before the Christian era the Britons overran the country and superimposed themselves upon its swarthy, squat inhabitants. They mounted comparatively high in the scale of civilization; they tilled the soil, worked mines, cultivated various forms of art, and even built towns. But their loose tribal organization left them at the mercy of the Romans; and though Julius Caesar's two raids in 55 B.C. and 54 B.C. left no permanent results, the conquest was soon completed when the Romans came in earnest in A.D. 43.

The extent to which the Romans during the three and a half centuries of their rule in Britain civilized its inhabitants is a matter of doubtful inference. The remains of Roman roads, Roman walls, and Roman villas still bear witness to their material activity; and an occupation of the land by Roman troops and Roman officials, spread over three hundred and fifty years, must have impressed upon the upper classes of the Britons at least some acquaintance with the language, religion, administration, and social and economic arrangements of the conquerors....