The High School Pitcher Dick & Co. on the Gridley Diamond 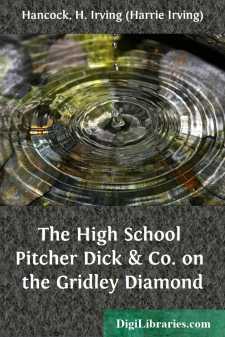 CHAPTER I THE PRINCIPAL HEARS SOMETHING ABOUT "PENNIES"

The barely audible droning of study ceased promptly in the big assembly room of the Gridley High School.

The new principal, who had just stepped into the room, and who now stood waiting behind his flat-top desk on the platform, was a tall, thin, severe-looking man of thirty-two or three.

For this year Dr. Carl Thornton, beloved principal for a half-score of years, was not in command at the school. Ill health had forced the good old doctor to take at least a year's rest, and this stranger now sat in the Thornton chair.

Harper, a little freshmen, who had merely meant to slip the paper inside his desk, and who was not making a disturbing noise thereby, flushed pink and sat immobile, the paper swinging from one hand.

From the principal's attitude and his look of seriousness, something unusual was pending. Some of the girls permitted their apprehension to be seen. On the faces of several of the boys rested a look of half defiance, for this principal was unpopular, and, by the students, was considered unjust.

"It being now in the early part of December," went on Mr. Cantwell, "we shall, on Monday, begin rehearsing the music for the special exercises to be held in this school on the day before Christmas. To that end, each of you found, on returning from recess, the new Christmas music on your desk."

Mr. Cantwell paused an instant for this important information to sink in. Several slight, little sighs of relief escaped the students, especially from the girls' side of the great room. This speech did not presage anything very dreadful to come.

"This sheet music," continued Mr. Cantwell, "is to be sold to the pupils at cost to the Board of Education. This cost price is fifteen cents."

Again Mr. Cantwell paused. It was a trick of his, a personal peculiarity. Then be permitted himself a slight smile as he added:

"This being Friday, I will ask you all to be sure to bring, on Monday morning, the money, which you will pay to me. Don't forget, please; each of you bring me his little fifteen pennies. Now, return to your studies until the beginning of the fourth period is announced."

As he bent his head low behind a bulky textbook, Dan Dalzell, of the sophomore class, glanced over at Dick Prescott with sparkling mischief gleaming in his eyes.

Dick, who was now a sophomore, and one of the assured leaders in sports and fun, guessed that Dan Dalzell was hatching another of the wild schemes for which Dalzell was somewhat famous. Dick even guessed that he knew about what was passing in Dan's mind.

Though moderate whispering was permitted, at need, in the assembly room, there was no chance for Dick and Dan to pass even a word at this time, for almost immediately the bell for the fourth period of the morning's work sounded, and the sections rose and filed out to the various recitation rooms.

To readers of the preceding volume in this series, Dick & Co....