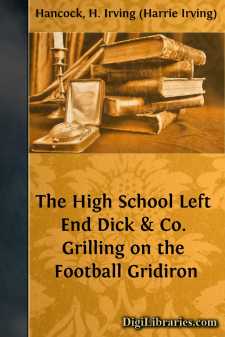 CHAPTER I SULKING IN THE FOOTBALL CAMP

"Football is all at sixes and sevens, this year," muttered DaveDarrin disconsolately.

"I can tell you something more than that," added Tom Reade mysteriously.

"What?" asked Dick Prescott, looking at Reade with interest, for it was unusual for Reade to employ that tone or air.

"Two members of the Athletics Committee have intimated to CoachMorton that they'd rather see football passed by this year."

"What?" gasped Dick. He was staring hard now.

"There must be something wrong with that news," put in Greg Holmes anxiously.

"No; I think it's all straight enough," persisted Tom, shaking his head to silence Holmes. "It came to me straight enough, though I don't feel at liberty to tell you who told me."

All six members of Dick & Co. were present. The scene of the meeting was Dick Prescott's own room at his home over the bookstore kept by his parents. The hour was about nine o'clock in the evening. It was Friday evening of the first week of the new school year. The fellows had dropped in to talk over the coming football season, because the week had been one of mysterious unrest in the football squad at Gridley High School.

Just what the trouble was, where it lay or how it had started was puzzling the whole High School student body. The squad was not yet duly organized. This was never attempted until in the second week of the school year. Yet it was always the rule that the new seniors who, during their junior year, had made good records on either the school eleven, or the second eleven, should form the nucleus of the new pigskin squad. Added to these, were the new juniors, formerly of the sophomore class, who had shown the most general promise in athletics during the preceding school year.

Gridley High School aimed to lead—-to be away at the top—-in all school athletics. The "Gridley spirit," which would not accept defeat in sports, was proverbial throughout the state.

And so, though the football squad was not yet formally organized for training and practice, yet, up to the last few days, it had been expected that a finer gridiron crowd than usual would present itself for weeding, sifting and training by Coach Morton. The latter was also one of the submasters of Gridley High School.

Since the school year had opened, however, undercurrent news had been rife that there would be many "soreheads," and that this would be an "off year" in Gridley football. Just where the trouble lay, or what the "kick" was about, was a puzzle to most members of the student body. It was an actual mystery to Dick & Co.

"What is all the undermining row about, anyway?" demanded Dick, looking around at his chums. Dick was pacing the floor. Dave, Tom and Greg Holmes were seated on the edge of the bed. Dan Dalzell was lying back in the one armchair that the room boasted. Harry Hazelton was standing by the door.

"I can't make a single thing out of it all," sighed Dan. "All I can get at is that some of the seniors and some of our class, the juniors, are talking as though they didn't care about playing this year....