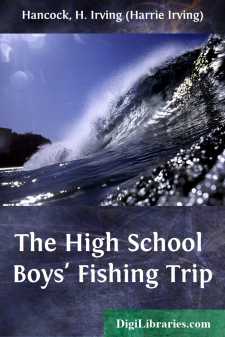 CHAPTER I TOM READE HAS A "BRAND-NEW ONE"

"Warm night," observed Tom Reade, as he paused not far from the street corner to wipe his perspiring face and neck with his handkerchief.

Yet the heat couldn't have made him extremely uncomfortable, for Tom Reade, amiable and budding senior in the Gridley High School, smiled good naturedly as he stood surveying as much as he could make out of the face of Timmy Finbrink in that dark stretch of the street.

Timmy was merely a prospective freshman, having been graduated a few days before from the North Grammar School in Gridley.

Tom, himself, had been graduated, three years before, from the fine old Central Grammar, whence, in his estimation, all the "regular" boys came. As a North Grammar boy, Timmy was to be regarded only with easygoing indifference. Yet a tale of woe quickly made Tom Reade his young fellow citizen's instant ally.

"Aren't you out pretty late, Timmy, for a boy who isn't even a regular high school freshman as yet?" inquired Reade, with another smile. "It's almost nine-thirty, you know."

"Don't I know?" wailed Timmy Finbrink, with something of a shiver. "It's getting later every minute, too, and I'm due for a trouncing when I do go in, so what's the odds?"

"Who's going to give you that trouncing?" Tom demanded.

"What have you been doing?"

"Pop told me to be upstairs and in bed by nine o'clock, without fail," Timmy explained. "I came along just five minutes ago, and found that pop has the house planted for me. I can't slip in without his knowing it."

"Oho! So your father has the other members of the family stationed where they can see you, whichever way you go into the house?" asked Reade, with genuine interest in the unfortunate Timmy.

"Nope," explained Timmy, with another shiver. "Mother and sister are away visiting, and pop is all alone in the house."

"But he can't watch both the front and back doors at the same time," Reade suggested hopefully.

"Can't he do just that, though?" sputtered Timmy. "I've been scouting on tip-toe around the house to get the lay of the land. Pop is smoking his pipe, and has placed his chair so that he can see both the back and the front doors, for he has the room doors open right through. There isn't a ghost of a show to get in without being seen—-and pop has the strap on a chair beside him!" finished Timmy, with an anticipatory shiver.

"I can fix it so you can get into the house while your father is doing something else," Tom declared.

"Can you? How? Ring the front door bell, while I slip in at the back door?"

"Nothing as stale as that," scoffed Tom Reade. "That wouldn't call for any brains, you see. Come along and we'll look over the lay of the land. Cheer up, Timmy! You'll have plenty of chance to slip into the house, get upstairs, undressed and be in bed before your father has time to get over the surprise that's coming to him."

"What are you going to——-" Timmy began breathlessly, but Tom interrupted him with:

"Keep quiet, and be ready to follow orders fast."

As they gained the front gate of the Finbrink yard Tom's keen eyes noted a brick lying on the grass....