by Stopford A. (Stopford Augustus) Brooke 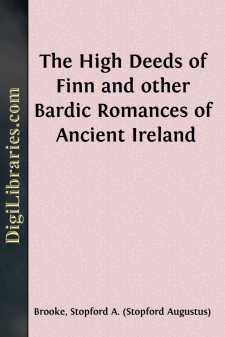 Many years have passed by since, delivering the Inaugural Lecture of the Irish Literary Society in London, I advocated as one of its chief aims the recasting into modern form and in literary English of the old Irish legends, preserving the atmosphere of the original tales as much as possible, but clearing them from repetitions, redundant expressions, idioms interesting in Irish but repellent in English, and, above all, from absurdities, such as the sensational fancy of the later editors and bards added to the simplicities of the original tales.

Long before I spoke of this, it had been done by P.W. Joyce in his OLD CELTIC ROMANCES, and by Standish O'Grady for the whole story of Cuchulain, but in this case with so large an imitation of the Homeric manner that the Celtic spirit of the story was in danger of being lost. This was the fault I had to find with that inspiring book, but it was a fault which had its own attraction.

Since then, a number of writers have translated into literary English a host of the Irish tales, and have done this with a just reverence for their originals. Being, in nearly every case, Irish themselves, they have tried, with varying success, to make their readers realize the wild scenery of Ireland, her vital union with the sea and the great ocean to the West, those changing dramatic skies, that mystic weather, the wizard woods and streams which form the constant background of these stories; nor have they failed to allure their listeners to breathe the spiritual air of Ireland, to feel its pathetic, heroic, imaginative thrill.

They have largely succeeded in their effort. The Irish bardic tales have now become a part of English literature and belong not only to grown up persons interested in early poetry, in mythology and folk-customs, but to the children of Ireland and England. Our new imaginative stories are now told in nurseries, listened to at evening when the children assemble in the fire-light to hear tales from their parents, and eagerly read by boys at school. A fresh world of story-telling has been opened to the imagination of the young.

This could not have been done in the right way if it had not been for the previous work of Celtic scholars in Ireland, and particularly on the Continent, in France and Germany. Having mastered medieval Irish, they have translated with careful accuracy many of the ancient tales, omitting and changing nothing; they have edited them critically, collating and comparing them with one another, and with other forms of the same stories. We have now in English, French, and German the exact representation of the originals with exhaustive commentaries.

When this necessary work was finished—and it was absolutely necessary—it had two important results on all work of the kind Mr Rolleston has performed in this book—on the imaginative recasting and modernizing of the ancient tales. First, it made it lawful and easy for the modern artist—in sculpture, painting, poetry, or imaginative prose—to use the stories as he pleased in order to give pleasure to the modern world....