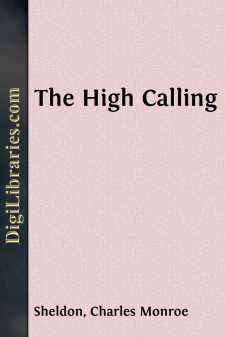 PAUL DOUGLAS and his wife, Esther, were holding a serious council together over their older boy, Walter.

"I can't help feeling a little disappointment over the way things are going. I did so want the boy to come into the office with me."

"I know," said Esther, with a grave smile, "but he seems to have his mind made up. I don't think we ought to thwart him if he is made to do that for his lifework."

"No," said Paul, looking at Esther with great thoughtfulness, "I have always believed that a boy should have freedom to choose his lifework. But what puzzles me is where did Walter get his leaning toward electrical engineering? None of my ancestors, so far as I know, ever had the slightest tendency that way, and the Darcys for generations have been business men.

"I was in the boy's room the other day," continued Paul, meditatively, "and he had the floor and his bed and the chairs covered with models of electrical machines. I was afraid to sit down or lean up against anything for fear it would go off and give me a shock or something. While I was asking questions, what did the boy do but start a contrivance that hung from the ceiling and it reached down a metallic arm that grabbed my hat off and began to comb my hair. I yelled, naturally, or unnaturally, and tried to get loose, but another contrivance shot out from the wall somewhere and clutched me by the leg and began to make frantic gestures at my shoes like a wild boot-blacking emporium. I decided to stand still rather than run the risk of getting hit somewhere else. Meanwhile Walter was laughing so hard he couldn't answer my emphatic request to know what the thing was going to do. He finally explained that it was a new device he was experimenting with to give the patient head treatment for nervous prostration, and black his shoes while he waited. I made him turn off the power and then I cautiously backed out of the room and gave him my testimonial on the efficacy of his invention adapted to give anyone nervous prostration and general paralysis who never had them."

Esther laughed, the same good, generous, contagious laugh she had always known, and Paul had always loved to hear.

"Walter is a genius. I always said he would make his mark."

"I was afraid he would make several on me before I could get away," saidPaul, smiling. "Well, of course, we have really decided to let the boygo to Burrton. If he is going to have a thorough course in electricity,I want him to have the best there is."

"I shall miss him dreadfully. O, dear, my darling!" Esther suddenly yielded to a good cry that somewhat upset Paul. Only once in a while in their married life had Esther given way to such a display of feeling. But before Paul went down to the office that morning she had dried her tears and with a hopeful smile prepared to make out a list of Walter's school necessities for the eight months he would be away from home.

Walter was twenty years old, tall and slim, with his father's features and his mother's voice, and a very strong liking for all scientific and mechanical work....