The Hidden Power And Other Papers upon Mental Science 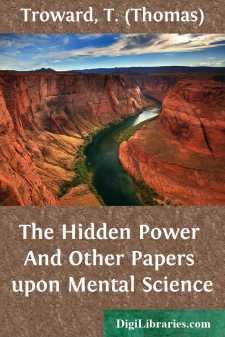 To realise fully how much of our present daily life consists in symbols is to find the answer to the old, old question, What is Truth? and in the degree in which we begin to recognise this we begin to approach Truth. The realisation of Truth consists in the ability to translate symbols, whether natural or conventional, into their equivalents; and the root of all the errors of mankind consists in the inability to do this, and in maintaining that the symbol has nothing behind it. The great duty incumbent on all who have attained to this knowledge is to impress upon their fellow men that there is an inner side to things, and that until this inner side is known, the things themselves are not known.

There is an inner and an outer side to everything; and the quality of the superficial mind which causes it to fail in the attainment of Truth is its willingness to rest content with the outside only. So long as this is the case it is impossible for a man to grasp the import of his own relation to the universal, and it is this relation which constitutes all that is signified by the word "Truth." So long as a man fixes his attention only on the superficial it is impossible for him to make any progress in knowledge. He is denying that principle of "Growth" which is the root of all life, whether spiritual intellectual, or material, for he does not stop to reflect that all which he sees as the outer side of things can result only from some germinal principle hidden deep in the centre of their being.

Expansion from the centre by growth according to a necessary order of sequence, this is the Law of Life of which the whole universe is the outcome, alike in the one great solidarity of cosmic being, as in the separate individualities of its minutest organisms. This great principle is the key to the whole riddle of Life, upon whatever plane we contemplate it; and without this key the door from the outer to the inner side of things can never be opened. It is therefore the duty of all to whom this door has, at least in some measure, been opened, to endeavour to acquaint others with the fact that there is an inner side to things, and that life becomes truer and fuller in proportion as we penetrate to it and make our estimates of all things according to what becomes visible from this interior point of view.

In the widest sense everything is a symbol of that which constitutes its inner being, and all Nature is a gallery of arcana revealing great truths to those who can decipher them. But there is a more precise sense in which our current life is based upon symbols in regard to the most important subjects that can occupy our thoughts: the symbols by which we strive to represent the nature and being of God, and the manner in which the life of man is related to the Divine life. The whole character of a man's life results from what he really believes on this subject: not his formal statement of belief in a particular creed, but what he realises as the stage which his mind has actually attained in regard to it....