by T. A. (Thomas Aiken) Goodwin 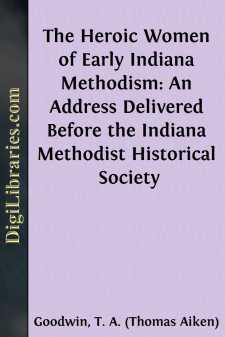 "Arms and the man, I sing," said the great Virgil, thousands of years ago, and all the little Virgils have been singing the man ever since. But who ever sings the woman? Occasionally a Debora or a Joan of Arc, a kind of a female monstrosity, comes to the front and receives recognition, but their conspicuousness is due more to the low level of their surroundings, than to their individual pre-eminence. They were out of their spheres in what gave them notoriety, and they have been so voted by universal consent through the ages. It was not specially to their credit that they successfully commanded armies, but it was to the unutterable shame of the men of their period that they had to, or let it go undone. No thanks to Betsey for killing the bear. She had to, or the bear would have killed the baby, but everlasting shame upon her worthless husband for making it necessary for her to do what he ought to have done. Betsey was out of her sphere when killing the bear, and so was the cowardly man when letting her do it.

The great Virgil graciously introduces a Dido into his song, but he does it apologetically, and only because it was necessary in order to make a love story out of it, and all the little Virgils—all the writers of love stories from that day to this—have treated her in literature as if she were indispensable to point a moral or to adorn a tale, and really fit for little else—that it was her mission to love and be loved, all of which was easy enough on her part; and that, having filled this mission, she ought to be happy and die contented, and to be held in everlasting remembrance. This outrage upon woman's rights and woman's worth has been carried so far that it has become common to assume that it is her prerogative to monopolize the love of the household—at least to possess and manage the greater part of it; and some women have heard this so often that they more than half believe it themselves, so that from away back men, and even some women, talk of a woman's love as being a little purer and a great deal stronger than a man's love. There is not a word of truth in it. It is one of the unfounded legends which have descended through the ages, transmitted from father to son, while the mothers and daughters, all unconscious of the great wrong they suffer by it, have never denied it. It is not only false, but it is absurd. How could it be true? A man is not lovable as a woman is. How can she love him as he loves her, who is the personification and incarnation of beauty and gentleness and sweetness? That is, some are, for it must be conceded that woman is like Jeremiah's figs, the good are very, very good, while the bad are very naughty—too bad for any use.

This wrong against woman has gone even farther than that. In the battles of life, however nobly she fights them, she receives no proper recognition. The man who fights well is a hero, but the woman who fights equally well, or even better, is only a heroine. I despise the word because I detest the discrimination it implies....