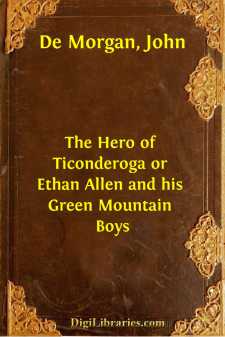 CHAPTER I. AT THE COURTHOUSE.

It was a cold, bleak and freezing day, was that second day of the year 1764, in the good town of Bennington.

The first day of the year had been celebrated in a devout fashion by nearly all the inhabitants of the district. Truly, some stayed away from the meeting-house, and especially was the absence of one family noticed.

"It seems to me kind of strange and creepy-like that those Allen boys will never come to meeting," good old Elder Baker had said, and the people shook their heads, and were quite ready to believe that the Allen boys were uncanny.

But after meeting, when the social celebration was at its height, the absence from the meeting-house was not thought of, and Ethan Allen and his brothers were welcomed as among the best farmers of the district.

When the farmers separated on that New Year's Day they had no thought of trouble, and each and all were planning what crops they should plant that year, and how much land they should reserve for pasture.

The snow was falling fast, and the Green Mountains looked grandly glorious as they, capped with the white snow, reflected into the valleys the feeble rays of the sun which were struggling through the clouds.

The hour of noon had arrived, and the good farmers were sitting down to good boiled dinners, which were as seasonable as the weather, when the ringing of the crier's bell caused every man and woman and child to leave the hot dinner and hurry to the door to hear the news.

All public and important events were announced in that manner, and it would not do to miss an announcement.

"Wonder what is in the wind now, eh, master?"

"Cannot say, but it's likely to be important, for Faithful Quincy has on his best coat."

Faithful Quincy was the official crier, or announcer of events, and was a most important character.

He never spoke one word, though everyone asked him what he had to announce, but he stood as silent as a statue, and as rigid until he thought the people had time to assemble.

Then he rang his bell once more, and followed the last sound of the brass with a most solemn appeal for attention:

Three times the phrase had to be repeated. Faithful would not have done his duty if he had only repeated it twice.

"This is to give notice, in the name of his majesty and of his excellency, the governor, that all true and faithful residents of the Green Mountain district must assemble at the courthouse at two hours after noon, on this second day of January. So let it be!"

That was all, but it was enough to set all the people wondering what was to be heard at the courthouse.

They returned to their homes, and finished their dinners, scarcely noticing that the dumplings were cold or that the boiled carrots had got soggy through long standing.

At two a large crowd had assembled at the courthouse, and all were in great excitement.

It was just three minutes after the hour, as shown by the sundial, which stood in front of the courthouse, that the sheriff appeared.