The Hawthorns A Story about Children 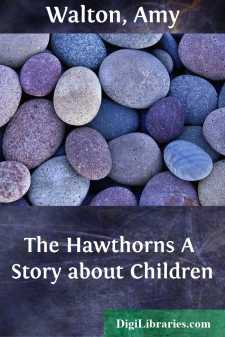 Quite close to the nursery window at Easney Vicarage there grew a very old pear-tree. It was so old that the ivy had had time to hug its trunk with strong rough arms, and even to stretch them out nearly to the top, and hang dark green wreaths on every bough. Some day, the children had been told, this would choke the life out of the tree and kill it; that would be a pity, but there seemed no danger of it yet, for every spring the pear-tree still showed its head crowned with white blossoms, and every summer the pears grew yellow and juicy, and fell with a soft “splosh!” on the gravel path beneath. It was interesting to watch that, and it happened so often, that it was hard to imagine a windsor pear without a great gash where the sharp stones had cut into it; it was also natural to expect when you picked it up that there would be a cunning yellow wasp hidden somewhere about it, for all the little Hawthorns had always found it so except the baby, and she was too small to have any experience. Five little Hawthorns, without counting the baby, had looked out of the nursery window and watched the pear-tree blossom, and the sparrows build their nests, and the pears fall; but by the time this story begins, four of them, whose names were Penelope, Ambrose, Nancy, and David, were schoolroom children, and learnt lessons of Miss Grey down-stairs. They had no longer much time for looking out of the window, and the nursery was left in the possession of Dickie and Cicely the baby. Dickie, whose real name was Delicia, was three years old—a great girl now she thought—but she was still fond of kneeling up in the window seat and flattening her little nose against the glass. She could not see very much. Through the branches of the pear-tree a little to the left appeared the church tower, and a glimpse here and there of grey and white tombstones in the churchyard. Straight in front of her there was a broad lawn sloping down to a sunk fence, and beyond that a meadow with tall elms in it, and after that another meadow where cows were feeding, and that was all. In the spring the meadows turned to gold and silver with the buttercups and daisies, and the rooks cawed noisily in the elms; but in the summer it was all very green and very quiet. Particularly at lesson time, when the “others” were busy with Miss Grey, and Dickie must not make a noise because baby was asleep. Then there was only Andrew to be seen in the distance, bending over his barrow or rake or spade; but he never looked up to the nursery window, and this was not surprising, for Andrew had a great deal to do. He worked in the garden, and fed the chickens, and took care of Ruby the horse, and sometimes drove the wagonette into Nearminster; he also rang the church bell, and was parish clerk. Perhaps it was because he had so much on his mind that he was of a melancholy disposition, and seldom disposed for conversation with the children.

They thought it a pity sometimes that neither the nursery nor the schoolroom window looked out to the front of the house, for it was only a little way back from the street; not that there was much going on in the village, but still you could hear the “clink, clink” from the blacksmith’s forge opposite, and see anyone passing the white gate which led out into the road....