The Harvest of Years 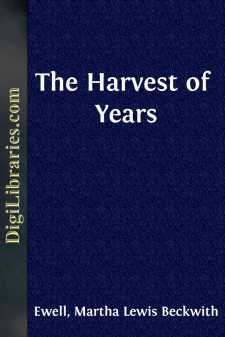 Among my earliest recollections these three words have a place, coming to my ears as the presages of a reprimand. I had made a frantic effort to lift my baby-brother from his cradle, and had succeeded only in upsetting baby, pillows and all, waking my mother from her little nap, while brother Hal stood by and shouted, "Emily did it." I was only five years of age at that eventful period, and was as indignant at the scolding I received when trying to do a magnanimous act, take care of baby and let poor, tired mother sleep, as I have been many times since, when, unluckily, I had upset somebody's dish, and "Emily did it" has rung its hateful sound in my ears. To say I was unlucky was not enough; I was untimely, unwarranted and unwanted, I often felt, in early years in everything I attempted, and the naturally quick temper I possessed was only aggravated and tortured into more harassing activity, rendering me on the whole, perhaps, not very amiable. Interesting I could not be, since whatever I attempted I seemed fated to say or do something to hurt somebody's feelings, and, mortified at my failures, I would draw myself closer to myself, shrinking from others, and saying again and again, "Emily, why must you do it?"

Introducing myself thus clouded to your sympathy, I cannot expect my reader would be interested in a rehearsal of all my early trials.

You can imagine how it must have been as I marched along from childhood through girlhood into womanhood, while I still clung to my strange ways and peculiar sayings; upsetting of inkstands at school, mud tracking over the carpet in the "best room" at home, unconscious betrayal of mischief plans, etc., etc., made up the full catalogue of my days and their experiences, and although I did have a few warm friends, I could not be as other girls were, generally happy and beloved.

Mother was the only real friend I had; it seemed to me, as I grew older, she learned to know that I was too often blamed, where at heart I was wholly blameless, and when sometimes she stroked my hair, and said, "My dear child, how unlucky you are," I felt that I could do anything for her, and she never, to my remembrance, said "Emily did it."

From my father I often heard it. Hal rarely, if ever, said anything else, and if I did sometimes darn his stockings a little too thick, it was not such a heinous crime. He was handsome, and I was as proud of his face as I was ashamed of my own; I know now that my features were not so bad, but my spirit never shone through them, while Hal carried every thought right in his face. My face also might have looked attractive if I had only been understood, but I blame no one for that, when I was covered even as a "leopard with spots," indicating everything but the blessed thoughts I sometimes had and the better part of my nature. The interval of years between my fifth and sixteenth birthdays was too full of recurring mishaps of every kind to leave within my memory distinct traces of the little joys that sometimes crept in upon me. I number them all when I recall the face of my more than blessed mother and the mild eyes of Mary Snow, who was kinder and nearer to me than the others of my school-mates.

Hal grew daily more of a torment, and being five years my senior, "bossed" me about to his satisfaction, except at such times as I grew too vexed with him to restrain my anger, and turning upon him would pour volleys of wrath upon his head. On these occasions he seemed really afraid of me, and, for a time after, I would experience a little peace. Learning from experience that keeping my thoughts to myself was the best means of quiet, I grew, after leaving school, less inclined to associate with anyone except sweet Mary Snow. One blessed consciousness grew daily on me, and that was that I came nearer my mother's heart, and as I was never lazy, I shared many of her joys and trials and learned to keep my rebellious nature almost wholly in check....