The Hand but Not the Heart or, The Life-Trials of Jessie Loring 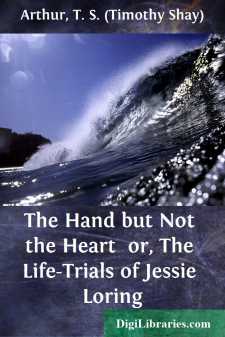 "PAUL!" The young man started, and a delicate flush mantled his handsome face, as he turned to the lady who had pronounced his name in a tone slightly indicative of surprise.

"You seem unusually absent-minded this evening," remarked the lady.

"You have been observing me?"

"I could not help it; for every time my eyes have wandered in this direction, they encountered you, standing in the same position, and looking quite as much like a statue as a living man."

"How long is it since I first attracted your attention?" inquired the person thus addressed, assuming an indifference of manner which it was plain he did not feel.

"If I were to say half an hour, it would not be far wide of the truth."

"Oh, no! It can't be five minutes since I came to this part of the room," said the young man, whose name was Paul Hendrickson. He seemed a little annoyed.

"Not a second less than twenty minutes," replied the lady. "Your thoughts must have been very busy thus to have removed nearly all ideas of time."

"They were busy," was the simple reply. But the low tones were full of meaning.

Mrs. Denison looked earnestly into her companion's face for several moments before venturing to speak farther. She then said, in a manner that showed her to be a privileged and warmly interested friend—

"Busy on what subject, Paul?"

The young man offered Mrs. Denison his arm, remarking as he did so—

"The other parlor is less crowded."

Threading their course amid the groups standing in gay conversation, or moving about the rooms, Paul Hendrickson and his almost maternal friend sought a more retired position near a heavily curtained window.

"You are hardly yourself to-night, Paul. How is it that your evenly balanced mind has suffered a disturbance. There must be something wrong within. You know my theory—that all disturbing causes are in the heart."

"I am not much interested in mental theories to-night—am in no philosophic mood. I feel too deeply for analysis."

"On what subject, Paul?"

A little while the young man sat with his eyes upon the floor; then lifting them to the face of Mrs. Denison, he replied.

"You are not ignorant of the fact that Jessie Loring has interested me more than any maiden I have yet seen?"

"I am not, for you have already confided to me your secret."

"She has a spirit of finer mould than most women," said Mrs. Denison. "I do not know her very intimately; but I have seen enough to give me a clue to her character. Her tastes are pure, her mind evenly balanced, and her intellect well cultivated."

Mr. Hendrickson sighed as he spoke.

"Only a woman! I scarcely understand you," said Mrs. Denison, gravely. "I am a woman."