The Guns of Shiloh A Story of the Great Western Campaign 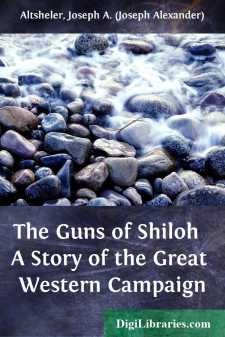 CHAPTER I. IN FLIGHT

Dick Mason, caught in the press of a beaten army, fell back slowly with his comrades toward a ford of Bull Run. The first great battle of the Civil War had been fought and lost. Lost, after it had been won! Young as he was Dick knew that fortune had been with the North until the very closing hour. He did not yet know how it had been done. He did not know how the Northern charges had broken in vain on the ranks of Stonewall Jackson's men. He did not know how the fresh Southern troops from the Valley of Virginia had hurled themselves so fiercely on the Union flank. But he did know that his army had been defeated and was retreating on the capital.

Cannon still thundered to right and left, and now and then showers of bursting shell sprayed over the heads of the tired and gloomy soldiers. Dick, thoughtful and scholarly, was in the depths of a bitterness and despair reached by few of those around him. The Union, the Republic, had appealed to him as the most glorious of experiments. He could not bear to see it broken up for any cause whatever. It had been founded with too much blood and suffering and labor to be dissolved in a day on a Virginia battlefield.

But the army that had almost grasped victory was retreating, and the camp followers, the spectators who had come out to see an easy triumph, and some of the raw recruits were running. A youth near Dick cried that the rebels fifty thousand strong with a hundred guns were hot upon their heels. A short, powerful man, with a voice like the roar of thunder, bade him hush or he would feel a rifle barrel across his back. Dick had noticed this man, a sergeant named Whitley, who had shown singular courage and coolness throughout the battle, and he crowded closer to him for companionship. The man observed the action and looked at him with blue eyes that twinkled out of a face almost black with the sun.

"Don't take it so hard, my boy," he said. "This battle's lost, but there are others that won't be. Most of the men were raw, but they did some mighty good fightin', while the regulars an' the cavalry are coverin' the retreat. Beauregard's army is not goin' to sweep us off the face of the earth."

His words brought cheer to Dick, but it lasted only a moment. He was to see many dark days, but this perhaps was the darkest of his life. His heart beat painfully and his face was a brown mask of mingled dust, sweat, and burned gunpowder. The thunder of the Southern cannon behind them filled him with humiliation. Every bone in him ached after such fierce exertion, and his eyes were dim with the flare of cannon and rifles and the rolling clouds of dust. He was scarcely conscious that the thick and powerful sergeant had moved up by his side and had put a helping hand under his arm.

"Here we are at the ford!" cried Whitley. "Into it, my lad! Ah, how good the water feels!"

Dick, despite those warning guns behind him, would have remained a while in Bull Run, luxuriating in the stream, but the crowd of his comrades was pressing hard upon him, and he only had time to thrust his face into the water and to pour it over his neck, arms, and shoulders....