The Gulf and Inland Waters The Navy in the Civil War. Volume 3. 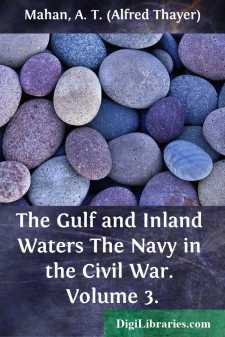 The naval operations described in the following pages extended, on the seaboard, over the Gulf of Mexico from Key West to the mouth of the Rio Grande; and inland over the course of the Mississippi, and its affluents, from Cairo, at the southern extremity of the State of Illinois, to the mouths of the river.

Key West is one of the low coral islands, or keys, which stretch out, in a southwesterly direction, into the Gulf from the southern extremity of the Florida peninsula. It has a good harbor, and was used during, as since, the war as a naval station. From Key West to the mouth of the Rio Grande, the river forming the boundary between Mexico and the State of Texas, the distance in a straight line is about eight hundred and forty miles. The line joining the two points departs but little from an east and west direction, the mouth of the river, in 25° 26' N., being eighty-three miles north of the island; but the shore line is over sixteen hundred miles, measuring from the southern extremity of Florida. Beginning at that point, the west side of the peninsula runs north-northwest till it reaches the 30th degree of latitude; turning then, the coast follows that parallel approximately till it reaches the delta of the Mississippi. That delta, situated about midway between the east and west ends of the line, projects southward into the Gulf of Mexico as far as parallel 29° N., terminating in a long, narrow arm, through which the river enters the Gulf by three principal branches, or passes. From the delta the shore sweeps gently round, inclining first a little to the north of west, until near the boundary between the States of Louisiana and Texas; then it curves to the southwest until a point is reached about one hundred miles north of the mouth of the Rio Grande, whence it turns abruptly south. Five States, Florida, Alabama, Mississippi, Louisiana, and Texas, in the order named, touch the waters bounded by this long, irregular line; but the shore of two of them, Alabama and Mississippi, taken together, extends over little more than one hundred miles. All five joined at an early date in the secession movement.

The character of the coast, from one end to the other, varies but slightly in appearance. It is everywhere low, and either sandy or marshy. An occasional bluff of moderate height is to be seen. A large proportion of the line is skirted by low sandy islands, sometimes joined by narrow necks to the mainland, forming inland sounds of considerable extent, access to which is generally impracticable for vessels of much draft of water. They, however, as well as numerous bays and the mouths of many small rivers, can be entered by light vessels acquainted with the ground; and during the war small steamers and schooners frequently escaped through them, carrying cargoes of cotton, then of great value. There is but little rise and fall of the tide in the Gulf, from one to two feet, but the height of the water is much affected by the direction of the wind.

The principal ports on or near the Gulf are New Orleans in Louisiana, Mobile in Alabama, and Galveston in Texas....