The Growth of Thought As Affecting the Progress of Society 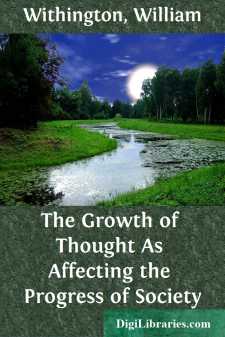 The meditation on human life—on the contrast between what is, and what might be, on supposing a general concurrence to make the best of things-yields emotions both painful and pleasing;—painful for the demonstrations every where presented, of a love of darkness, rather than light; pleasing, that the worst evils are seen to be so remediable; and so clear the proofs of a gradual, but sure progress towards the remedy.

The writer is not very familiar with those authors, who have so much to say on the problem of life—the question, What is life? He supposes them to follow a train of thought, something like this: The life of a creature is that perfection and flourish of its faculties, of which its constitution is capable, and which some of the race are destined to reach. Thus, the life of the lion is realized, when the animal ranges undisputed lord of the sunny desert; finds sufficiency of prey for himself and offspring, which he raises to inherit dominion; lives the number of years he is capable of enjoying existence, and then closes it, without excessive pains, lingering regrets, or fearful anticipations.

Life differs from happiness. It is supposable, that the lion, tamed and petted, trained to feed somewhat after man's chosen manner, may be as happy as if at liberty in his native range. But such happiness is not the animal's life; since this implies the kind of happiness proper to the creature's constitution, in distinction from that induced by forced habits.

To happiness add knowledge and intellectual culture, and all together do not realize the idea of life. The tame lion may be taught many arts, assimilating him to the intelligence of man; but these remove him so much further from his appropriate life. Thus there may be a cultivated intelligence, which constitutes no part of the creature's life; and this without considering the same as a moral agent.

Macauley remarks, that the Jesuits seem to have solved the problem, how far intellectual culture may be carried, without producing intellectual emancipation. I suppose it would be only varying the expression of his thought to say, Jesuitical education strikingly exemplifies, how much intellectual culture may be superinduced upon the mind, without awakening intellectual life—without developing a spontaneous aptness to appreciate, seek, find, embrace the truth. The head is filled with the thoughts of others-many ascertained facts and just conclusions. It can reason aright in the circles of thought, where it has been trained to move; but elsewhere, no spontaneous activity—no self-directed power of thinking justly on new emergencies and questions not yet settled by rule—no spring within, from which living waters flow.

The difference between intellectual culture and intellectual life appears in the fact, that in regard to those mastering ideas, which to after times mark one age as in advance of the preceding, the classical scholars, the scientific luminaries, the constitutional expounders of the day, are quite as likely to be behind the general sense of the age, as to be in advance....