The Growth of English Drama 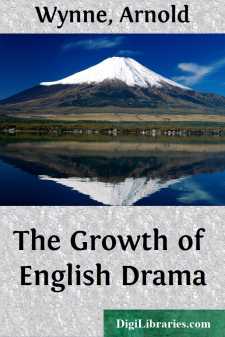 CHAPTER I EARLY CHURCH DRAMA ON THE CONTINENT

The old Classical Drama of Greece and Rome died, surfeited with horror and uncleanness. Centuries rolled by, and then, when the Old Drama was no more remembered save by the scholarly few, there was born into the world the New Drama. By a curious circumstance its nurse was the same Christian Church that had thrust its predecessor into the grave.

A man may dig his spade haphazard into the earth and by that act liberate a small stream which shall become a mighty river. Not less casual perhaps, certainly not less momentous in its consequences, was the first attempt, by some enterprising ecclesiastic, to enliven the hardly understood Latin service of the Church. Who the innovator was is unrecorded. The form of his innovation, however, may be guessed from this, that even in the fifth century human tableaux had a place in the Church service on festival occasions. All would be simple: a number of the junior clergy grouped around a table would represent the 'Marriage at Cana'; a more carefully postured group, again, would serve to portray the 'Wise Men presenting gifts to the Infant Saviour'. But the reality was greater than that of a painted picture; novelty was there, and, shall we say, curiosity, to see how well-known young clerics, members of local families, would demean themselves in this new duty. The congregations increased, and earnest or ambitious churchmen were incited to add fresh details to surpass previous tableaux.

But the Church is conservative. It required the lapse of hundreds of years to make plain the possibility of action and its advantages over motionless figures. Just before this next step was taken, or it may have been just after, two of the scholarly few mentioned as having not quite forgotten the Classical Drama, made an effort to revive its methods while bitting and bridling it carefully for holy purposes. Some one worthy brother (who was certainly not Gregory Nazianzene of the fourth century), living probably in the tenth century, wrote a play called Christ's Passion, in close imitation of Greek tragedy, even to the extent of quoting extensively from Euripides. In the same century a good and zealous nun of Saxony, Hroswitha by name, set herself to outrival Terence in his own realm and so supplant him in the studies of those who still read him to their souls' harm. She wrote, accordingly, six plays on the model of Terence's Comedies, supplying, for his profane themes, the histories of suffering martyrs and saintly maidens. It was a noble ambition (not the less noble because she failed); but it was not along the lines of her plays or of Christ's Passion that the New Drama was to develop. It is doubtful whether they were known outside a few convents.

In the tenth century the all-important step from tableau to dialogue and action had been taken. Its initiation is shrouded in obscurity, but may have been as follows. Ever since the sixth century Antiphons, or choral chants in which the two sides of the choir alternately respond to each other, had been firmly established in the Church service....