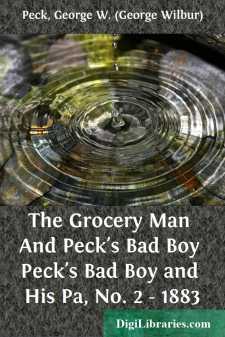 "How do you and your Pa get along now," asked the grocery-man of the bad boy, as he leaned against the counter instead of sitting down on a stool while he bought a bottle of liniment.

"O, I don't know. He don't seem to appreciate me. What he ought to have is a deaf and dumb boy, with only one leg, and both arms broke—then he could enjoy a quiet life. But I am too gay for Pa, and you needn't be surprised if you never see me again. I talk of going off with a circus. Since I played the variegated dogs on Pa, there seems to have been a coldness in the family, and I sleep on the roof.

"Variegated dogs," said the store keeper, "what kind of a game is that? You have not played another Daisy trick on your Pa, have you?"

"Oh, no, it was nothing of that kind. You know Pa thinks he is smart. He thinks because he is forty-eight years old he knows it all; but it don't seem to me as though a man of his age, that had sense, would let a tailor palm off on him a pair of pants so tight that he would have to use a button-hook to button them; but they can catch him on everything, just as though he was a kid smoking cigarettes. Well, you know Pa drinks some. That night the new club opened he came home pretty fruitful, and next morning his head ached so he said he would buy me a dog if I would go down town and get a bottle of pollynurious water for him. You know that dye house on Grand avenue, where they have got the four white spitz dogs. When I went after the penurious water, I noticed they had been coloring their dogs with the dye stuff, and I put up a job with the dye man's little boy to help me play it on Pa. They had one dog dyed pink, another blue, another red, and another green, and I told the boy I would treat him to ice cream if he would let one out at a time, when I came down with Pa, and call him in and let another out, and when we started to go away, to let them all out. What I wanted to do was to paralyze Pa, and make him think he had got 'em, got dogs the worst way. So, about ten o'clock when his head got cleared off, and his stomach got settled, he changed ends with his cuffs, and we came down town, and I told him I knew where he could get a splendid white spitz dog for me, for five dollars; and if he would get it, I would never do anything disrespectful again, and would just sit up nights to please him, and help him up stairs and get seltzer for him. So we went by the dye house, and just as I told him I didn't want anything but a white dog, the door opened, and the pink dog came out and barked at us, and I said 'that's him' and the boy called him back. Pa looked as though he had the colic, and his eyes stuck out, and he said 'Hennery, that is a pink dog?' and I said 'no, it is a white dog, Pa,' and just then the green dog came out, and I asked Pa if it wasn't a pretty white dog, and and he turned pale and said 'hell, boy, that is a green dog—what's got into the dogs?' I told him he must be color blind, and was feeling in my pocket for a strap to tie the dog, and telling him he must be careful of his health or he would see something worse than green dogs, when the green dog went in, and the blue dog came rushing out and barked at Pa....