The Grey Woman and other Tales 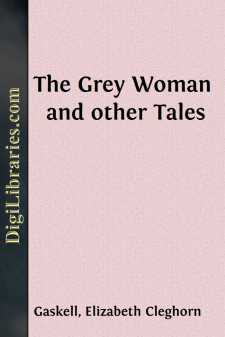 There is a mill by the Neckar-side, to which many people resort for coffee, according to the fashion which is almost national in Germany. There is nothing particularly attractive in the situation of this mill; it is on the Mannheim (the flat and unromantic) side of Heidelberg. The river turns the mill-wheel with a plenteous gushing sound; the out-buildings and the dwelling-house of the miller form a well-kept dusty quadrangle. Again, further from the river, there is a garden full of willows, and arbours, and flower-beds not well kept, but very profuse in flowers and luxuriant creepers, knotting and looping the arbours together. In each of these arbours is a stationary table of white painted wood, and light moveable chairs of the same colour and material.

I went to drink coffee there with some friends in 184—. The stately old miller came out to greet us, as some of the party were known to him of old. He was of a grand build of a man, and his loud musical voice, with its tone friendly and familiar, his rolling laugh of welcome, went well with the keen bright eye, the fine cloth of his coat, and the general look of substance about the place. Poultry of all kinds abounded in the mill-yard, where there were ample means of livelihood for them strewed on the ground; but not content with this, the miller took out handfuls of corn from the sacks, and threw liberally to the cocks and hens that ran almost under his feet in their eagerness. And all the time he was doing this, as it were habitually, he was talking to us, and ever and anon calling to his daughter and the serving-maids, to bid them hasten the coffee we had ordered. He followed us to an arbour, and saw us served to his satisfaction with the best of everything we could ask for; and then left us to go round to the different arbours and see that each party was properly attended to; and, as he went, this great, prosperous, happy-looking man whistled softly one of the most plaintive airs I ever heard.

"His family have held this mill ever since the old Palatinate days; or rather, I should say, have possessed the ground ever since then, for two successive mills of theirs have been burnt down by the French. If you want to see Scherer in a passion, just talk to him of the possibility of a French invasion."

But at this moment, still whistling that mournful air, we saw the miller going down the steps that led from the somewhat raised garden into the mill-yard; and so I seemed to have lost my chance of putting him in a passion.

We had nearly finished our coffee, and our "kucken," and our cinnamon cake, when heavy splashes fell on our thick leafy covering; quicker and quicker they came, coming through the tender leaves as if they were tearing them asunder; all the people in the garden were hurrying under shelter, or seeking for their carriages standing outside. Up the steps the miller came hastening, with a crimson umbrella, fit to cover every one left in the garden, and followed by his daughter, and one or two maidens, each bearing an umbrella....