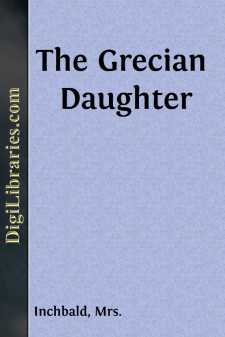 This tragedy has been so rapturously applauded on the stage, and so severely criticised in the closet, that it is a task of peculiar difficulty to speak either of its beauties or its defects, with any degree of certainty. To conciliate both the auditor and the reader, both the favourable and the unfavourable critic, the "Grecian Daughter" demands a set of Remarks for each side of the question—and the good-natured side shall have precedence.

This play had, on its first appearance, the most brilliant success, and still holds a place in the list of dramas performed during every season. There is a splendour of decoration, a glow of martial action, events of such deep interest, and, above all, a moral of such excellent tendency, which concludes the performance, that its attraction can readily be accounted for, without the slightest imputation upon the judgment of the public.

Perhaps, of all the events recorded in history, that filial piety, on which the fable of this play is founded, may be classed among the most affecting—yet it was one the most hazardous for a dramatist to adopt; for nothing less than complete skill could have given to this singular occurrence effectual force, joined to becoming delicacy. In this arduous effort Mr. Murphy has evinced the most exact judgment, and the nicest execution.

If this tragedy has not the smooth flowing verse of Otway, Thomson, or Rowe, it possesses, in energy and fire, charms more theatrical; nor does the heroic so wholly engross every scene, but that it yields, at times, to melting pathos.

Another praise due to this production is, that wonderful events take place by the most natural agency. Incidents arise progressively from each other, till the last great incident of all, fills every mind with enthusiasm in the cause of virtue and justice—in the joy of an empire made free by the overthrow of its tyrant.

It is hardly possible to read this tragedy of the "Grecian Daughter," without laughing as well as crying. Some passages excite tears, whilst certain high-sounding sentences, with meaning insignificant, are irresistibly risible.

The popular story, from which the fable of this tragedy is produced, and the surprising event in the last scene—where a woman performs that which a whole army has in vain attempted—together with the powerful acting of Mrs. Barry in the part of Euphrasia, rendered this play greatly attractive when it was first performed; and as those causes of attraction still remain, or rather, an improvement is introduced by Mrs. Siddons's appearance in the Grecian Daughter, the play is still of use to the theatre.

The men's characters have been all sacrificed by the author to the valour of the woman—he has made his female do the deed of a man, and his best man perform the act of a child.

Though Evander ranks as the first male character in this play, no actor likes to appear in the part. He would rather be inferior, and less infirm.

As Mr. Murphy had much theatrical experience as well as taste, it is astonishing that the personage most talked of, most praised, and by far the most perfect character in the whole drama, should never make his appearance!

Timoleon is a great warrior and a good man; and it seems wonderful how the audience, on the first night of the play, would quit the theatre without seeing him. Yet it was but modesty and respect in the author, not to bring so magnanimous a hero on the scene, to speak bad poetry.

The great tragic dramatist, Otway, wrote miserable comedies: Let it be no disgrace to Murphy that he has written an indifferent tragedy. By the merit of his comic scenes, his tragic ones are perhaps judged, and in the comparison lose half their value.