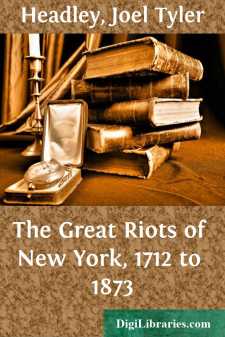 Character of a City illustrated by Riots.—New Material for History ofDraft Riots.—History of the Rebellion incomplete without History ofthem.—The Fate of the Nation resting on the Issues of the Struggle in NewYork City.—The best Plan to adopt for Protection against Mobs.

The history of the riots that have taken place in a great city from its foundation, is a curious and unique one, and illustrates the peculiar changes in tone and temper that have come over it in the course of its development and growth. They exhibit also one phase of its moral character—furnish a sort of moral history of that vast, ignorant, turbulent class which is one of the distinguishing features of a great city, and at the same time the chief cause of its solicitude and anxiety, and often of dread.

The immediate cause, however, of my taking up the subject, was a request from some of the chief actors in putting down the Draft Riots of 1863, to write a history of them. It was argued that it had never been written, except in a detached and fragmentary way in the daily press, which, from the hurried manner in which it was done, was necessarily incomplete, and more or less erroneous.

It was also said, and truly, that those who, by their courage and energy, saved the city, and who now would aid me not only officially, but by their personal recollections and private memoranda, would soon pass away, and thus valuable material be lost.

Besides these valid reasons, it was asserted that the history of the rebellion was not complete without it, and yet no historian of that most important event in our national life had given the riots the prominence they deserved, but simply referred to them as a side issue, instead of having a vital bearing on the fate of the war and the nation. On no single battle or campaign did the destiny of the country hinge as upon that short, sharp campaign carried on by General Brown and the Police Commissioners against the rioters in the streets of New York, in the second week of July, 1863. Losses and defeats in the field could be and were repaired, but defeat in New York would in all probability have ended the war. It is not necessary to refer to the immediate direct effects of such a disaster on the army in the field, although it is scarcely possible to over-estimate the calamitous results that would have followed the instantaneous stoppage, even for a short time, of the vast accumulations of provisions, ammunition, and supplies of all kinds, that were on their way to the army through New York. Nor is it necessary to speculate on the effect of the diversion of troops from the front that such an event would have compelled, in order to recover so vital a point. Washington had better be uncovered than New York be lost. One thing only is needed to show how complete and irreparable the disaster would have been; namely, the effect it would have had on the finances of the country. With the great banking-houses and moneyed institutions of New York sacked and destroyed, the financial credit of the country would have broken down utterly....