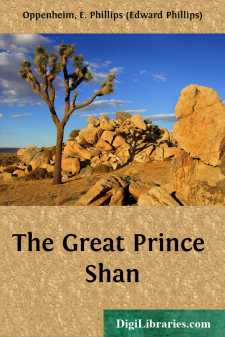 "A club for diplomats and gentlemen," Prince Karschoff remarked, looking lazily through a little cloud of tobacco smoke around the spacious but almost deserted card room. "The classification seems comprehensive enough, yet it seems impossible to get even a decent rubber of bridge."

Sir Daniel Harker, a many years retired plenipotentiary to one of the smaller Powers, shrugged his shoulders.

"Personally, I have come to the conclusion," he declared, "that the raison d'être for the club seems to be passing. There is no diplomacy, nowadays, and every man who pays his taxes is a gentleman. Kingley, you are the youngest. Ransack the club and find a fourth."

The Honourable Nigel Kingley smiled lazily from the depths of his easy-chair. He was a young Englishman of normal type, long-limbed, clean-shaven, with good features, a humorous mouth and keen grey eyes.

"In actual years," he admitted, "I may have the advantage of you two, but so far as regards the qualities of youth, Karschoff is the youngest man here. Besides, no one could refuse him anything."

"It is a subterfuge," the Prince objected, "but if I must go, I will go presently. We will wait five minutes, in case Providence should be kind to us."

The three men relapsed into silence. They were seated in a comfortable recess of the card room of the St. Philip's Club. The atmosphere of the apartment seemed redolent with suggestions of faded splendour. There was a faint perfume of Russian calf from the many rows of musty volumes which still filled the stately bookcases. The oil paintings which hung upon the walls belonged to a remote period. In a distant corner, four other men were playing bridge, speechless and almost motionless, the white faces of two of them like cameos under the electric light and against the dark walls. There was no sound except the soft patter of the cards and the subdued movements of a servant preparing another bridge table by the side of the three men. Then the door of the room was quietly opened and closed. A man of youthful middle-age, carefully dressed, with a large, clean-shaven face, blue eyes, and fair hair sprinkled with grey, came towards them. He was well set up, almost anxiously ingratiating in manner.

"You see now what Providence has sent," Sir Daniel Harker observed under his breath.

"It is enough to make an atheist of one, this!" the Prince muttered.

"Any bridge?" the newcomer enquired, seating himself at the table and shuffling one of the packs of cards.

The three men rose to their feet with varying degrees of unwillingness.

"Immelan is too good for us," Sir Daniel grumbled. "He always wins."

"I am lucky," the newcomer admitted, "but I may be your partner; in which case, you too will win."

"If you are my partner," the Prince declared, "I shall play for five pounds a hundred. I desire to gamble. London is beginning to weary me."

"Mr. Kingley is a better player, though not so lucky," Immelan acknowledged, with a little bow.

"Never believe it, with all due respect to our young friend here," Sir Daniel replied, as he cut a card....