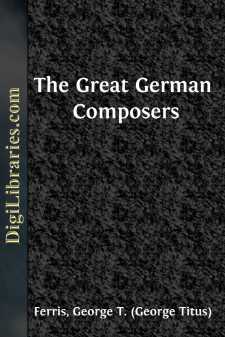 The growth and development of German music are eminently noteworthy facts in the history of the fine arts. In little more than a century and a half it reached its present high and brilliant place, its progress being so consecutive and regular that the composers who illustrated its well-defined epochs might fairly have linked hands in one connected series.

To Johann Sebastian Bach must be accorded the title of "father of modern music." All succeeding composers have bowed with reverence before his name, and acknowledged in him the creative mind which not only placed music on a deep scientific basis, but perfected the form from Which have been developed the wonderfully rich and varied phases of orchestral composition.

Handel, who was his contemporary, having been born the same year, spoke of him with sincere admiration, and called him the giant of music. Haydn wrote: "Whoever understands me knows that I owe much to Sebastian Bach, that I have studied him thoroughly and well, and that I acknowledge him only as my model." Mozart's unceasing research brought to light many of his unpublished manuscripts, and helped Germany to a full appreciation of this great master. In like manner have the other luminaries of music placed on record their sense of obligation to one whose name is obscure to the general public in comparison with many of his brother composers.

Sebastian Bach was born at Eisenach on the 21st of March, 1685, the son of one of the court musicians. Left in the care of his elder brother, who was an organist, his brilliant powers displayed themselves at an early period. He was the descendant of a race of musicians, and even at that date the wide-spread branches of the family held annual gatherings of a musical character. Young Bach mastered for himself, without much assistance, a thorough musical education at Lüne-burg, where he studied in the gymnasium and sang in the cathedral choir; and at the age of eighteen we find him court musician at Weimar, where a few years later he became organist and director of concerts. He had in the mean time studied the organ at Lübeck under the celebrated Buxtehude, and made himself thoroughly a master of the great Italian composers of sacred music—Palestrina, Lotti, Vivaldi, and others.

At this period Germany was beginning to experience its musical renaissance. The various German courts felt that throb of life and enthusiasm which had distinguished the Italian principalities in the preceding century in the direction of painting and sculpture. Every little capital was a focus of artistic rays, and there was a general spirit of rivalry among the princes, who aspired to cultivate the arts of peace as well as those of war. Bach had become known as a gifted musician, not only by his wonderful powers as an organist, but by two of his earlier masterpieces—"Gott ist mein König" and "Ich hatte viel Bektlmmerniss." Under the influence of an atmosphere so artistic, Bach's ardor for study increased with his success, and his rapid advancement in musical power met with warm appreciation....