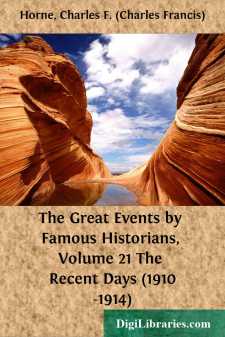 AN OUTLINE NARRATIVE TRACING BRIEFLY THE CAUSES, CONNECTIONS, AND CONSEQUENCES OF THE GREAT EVENTS THE RECENT DAYS (1910-1914) CHARLES F. HORNE

The awful, soul-searing tragedy of Europe's great war of 1914 came to most men unexpectedly. The real progress of the world during the five years preceding the war had been remarkable. All thinkers saw that the course of human civilization was being changed deeply, radically; but the changes were being accomplished so successfully that men hoped that the old brutal ages of military destruction were at an end, and that we were to progress henceforth by the peaceful methods of evolution rather than the hysterical excitements and volcanic upheavals of revolution.

Yet even in the peaceful progress of the half-decade just before 1914 there were signs of approaching disaster, symptoms of hysteria. This period displayed the astonishing spectacle of an English parliament, once the high example for dignity and the model for self-control among governing bodies, turned suddenly into a howling, shrieking mob. It beheld the Japanese, supposedly the most extravagantly loyal among devotees of monarchy, unearthing among themselves a conspiracy of anarchists so wide-spread, so dangerous, that the government held their trials in secret and has never dared reveal all that was discovered. It beheld the women of Persia bursting from the secrecy of their harems and with modern revolvers forcing their own democratic leaders to stand firm in patriotic resistance to Russian tyranny. It beheld the English suffragettes.

Yet the movement toward universal Democracy which lay behind all these extravagances was upon the whole a movement borne along by calm conviction, not by burning hatreds or ecstatic devotions. A profound sense of the inevitable trend of the world's evolution seemed to have taken possession of the minds of the masses of men. They felt the uselessness of opposition to this universal progress, and they showed themselves ready, sometimes eager, to aid and direct its trend as best they might.

If, then, we seek to give a name to this particular five years, let us call it the period of humanitarianism, of man's really awakened kindliness toward his brothers of other nationalities. The universal peace movement, which was a child in 1910, had by 1914 become a far-reaching force to be reckoned with seriously in world politics. Any observer who studied the attitude of the great American people in 1898 on the eve of their war with Spain, and again in 1914 during the trouble with Mexico, must have clearly recognized the change. There was so much deeper sense of the tragedy of war, so much clearer appreciation of the gap between aggressive assault and necessary self-defense, so definite a recognition of the fact that murder remains murder, even though it be misnamed glory and committed by wholesale, and that any one who does not strive to stop it becomes a party to the crime.

While the sense of brotherhood was thus being deepened among the people of all the world, the associated cause of Democracy also advanced....