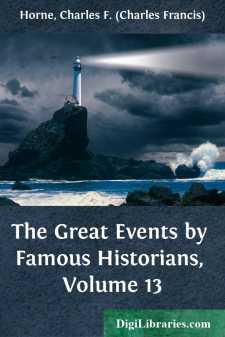 uring the eighteenth century a remarkable change swept over Europe. The dominant spirit of the time ceased to be artistic as in the Renaissance, or religious as in the Reformation, or military as during the savage civil wars that had followed. The central figure of the world was no longer a king, nor a priest, nor a general. Instead, the man on whom all eyes were fixed, who towered above his fellows, was a mere author, possessed of no claim to notice but his pen. This was the age of the arisen intellect.

The rule of Louis XIV, both in its splendor and its wastefulness, its strength and its oppression, its genius and its pride, had well prepared the way for what should follow. Not only had French culture extended over Europe, but the French language had grown everywhere to be the tongue of polite society, of the educated classes. It had supplanted Latin as the means of communication between foreign courts. Moreover, the most all-pervading and obtrusive of French monarchs was succeeded by the most retiring, the one most ready of all to let the world take what course it would. Louis XV chanced to reign during this entire period, from 1715 to 1774, and that is equivalent to saying that France, which had become the chief state of Europe, was ungoverned, was only robbed and bullied for the support of a profligate court. So long as citizens paid taxes, they might think—and say—wellnigh what they pleased.

The elder Louis had realized something of the error of his own career and had left as his last advice to his successor, to abstain from war. We are told that the obedient legatee accepted the caution as his motto, and had it hung upon his bedroom wall, where it served him as an excellent excuse for doing nothing at all. His government was notoriously in the hands of his mistresses, Pompadour and the others, and their misrule was to the full as costly to France as the wars of the preceding age. They drained the country quite as deeply of its resources and renown; they angered and insulted it far more.

Meanwhile the misery of all Europe, caused by the continued warfare, cried out for reform, demanded it imperatively if the human race were not to disappear. The population of France had diminished by over ten per cent. during the times of the "Grand Monarch"; the cost of the Thirty Years' War to Germany we have already seen. Hence we find ourselves in a rather thoughtful and anxious age. Even kings begin to make some question of the future. Governments become, or like to call themselves, "benevolent despotisms," and instead of starving their subjects look carefully, if somewhat dictatorially, to their material prosperity.

England, to be sure, but England alone, stands out as an exception to the prevalence of despotic rule. There the commons had already won their battle. King George I, the German prince whom they had declared their sovereign after the death of Anne (1714), did not even know his subjects' language, communicated with his ministers in barbaric Latin, and left the governing wholly in their hands. The "cabinet" system thus sprang up; the ministers were held responsible to Parliament and obeyed its will. The exiled Stuart kings made one or two feeble attempts to win back their throne, but the tide of progress was against them and their last hope vanished in the slaughter of Culloden.

By that defeat Great Britain was finally and firmly established as a parliamentary government; and the most marked of all the physical changes of the century was the rapid expansion of her power under this new form of rule....