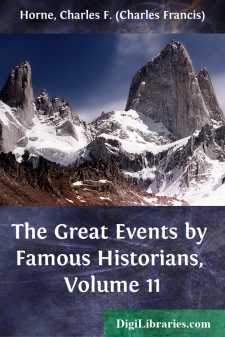 Gazing across the broader field of universal history, one comes more and more to overlook the merely temporary, constantly shifting border lines of states, and to see Western Europe as a whole, to watch its nations as a single people guided by similar developments of the mind, impelled by similar stirrings of the heart, taking part in but a single story, the marvellous tale of man's advance.

This sense of an all-enfolding unity, an ever-advancing common destiny, sinks weakest perhaps in the period we now approach. The nations seem sharply separated in their careers. In the preceding age the power of Spain and the fanaticism of its monarch, Philip II, had made the reëstablishment of Catholicism the dominant question throughout Europe. But in 1609 Philip III of Spain abandoned his father's attempt to conquer Holland and again enforce a universal religion. In 1610 Henry IV of France, who had brought peace and amity out of the savage religious wars within his own realm, fell under an assassin's knife. These two events may be accepted as marking a turn in the current of the world, a change in the thoughts of men. The next half-century saw wars indeed, bloody and bitter wars, but they were no longer primarily religious. The strife was more than half political, and men of opposite faiths found themselves at times allied upon the battle-field. The feeling of religious brotherhood grew weaker, that of political allegiance stronger.

The triumph of Holland had much to do with this. During almost a generation the Catholics of the Southern Netherlands had been united with the Protestants of the Northern Provinces in desperate war against the tyranny of Spain; and though only Holland finally achieved independence, her people could scarce forget their long brotherhood with the Catholic South. And now Holland was a republic, her people were self-governing! Looking with prophetic vision into the future, we may assert that this was only the first step toward a broader union of all the nations when every man shall be self-governing, and hence all shall be equal and united and progressive. But for its own time at least the freedom of Holland was a sharp influence toward division among the people of Europe, toward the establishment of differences, the growth of national as opposed to universal brotherhood.

There was, to be sure, an earlier republic in Europe, Switzerland. But the Swiss maintained themselves by their isolation, their remoteness from other nations and from one another in their bleak mountain valleys. The Dutch, on the contrary, inhabited a flat sea-coast; they were traders; their very existence depended on intercourse with other lands. Hence they had to be ever alert in defence of their hard-won freedom. The spirit of nationality, of patriotism grew strong within them. At one time they had been members of the German empire; at another, subjects of France, of Burgundy, of Spain....