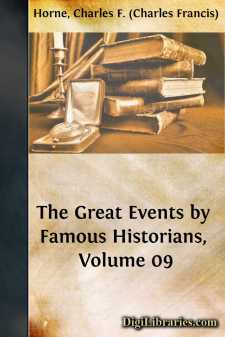 Our modern world begins with the Protestant Reformation. The term itself is objected to by Catholics, who claim that there was little real reform. But the importance of the event, whether we call it reform or revolution, is undenied. Previous to 1517 the nations of Europe had formed a single spiritual family under the acknowledged leadership of the Pope. The extent of the Holy Father's authority might be disputed, especially when he interfered in affairs of state. Kings had fought against his troops on the field of battle. But in spiritual matters he was still supreme, and when reformers like Huss and Savonarola refused him obedience on questions of doctrine, the very men who had been fighting papal soldiers were shocked by this heretical wickedness. The heretics were burned and the wars resumed. When Alexander Borgia sat upon the papal throne for eleven years, there were even philosophers who drew from his very wickedness an argument for the divine nature of his office. It must be indeed divine, said they, since despite such pollution as his, it had survived and retained its influence.

Some modern critics have even gone so far as to assert that for at least two generations before the Reformation the great majority of the educated classes had ceased to care whether the Christian religion were true or not. The Renaissance had so awakened their interest in the affairs of this world, its artistic beauties and intellectual advance, that they gave no thought to the beyond. But we approach controversial matters scarce within our scope. Suffice it to say that the Reformation brought religion once more into intensest prominence in all men's eyes, and that a large portion of the civilized world broke away from the domination of the Pope. Men insisted on judging for themselves in spiritual matters. Only after three centuries of strife was the privilege granted them. Only within the past century has thought been made everywhere free—at least from direct physical coercion. The last execution by the Spanish Inquisition was in 1826, and the institution was formally abolished in 1835.

The era of open warfare and actual bodily torture between various sects all calling themselves Christian, thus extended over three centuries. These may be divided into four periods. The first is one of fierce dispute but little actual warfare, during which the revolt spread over Europe with Germany as its centre. An agreement between the contestants was still hoped for; the break was not recognized as final until 1555, when, by the Peace of Augsburg, the two German factions definitely agreed to separate and to refrain from interference with each other. Or perhaps it would be better to end the first period with 1556, when the mighty Emperor, Charles V, resigned all his authority, giving Germany to his brother, Ferdinand, who maintained peace there, while Spain passed to Charles' son, Philip II, most resolute and fanatic of Catholics....