The Great Events by Famous Historians, Volume 06 (From Barbarossa to Dante) 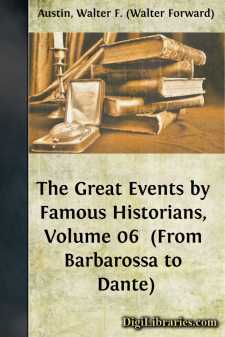 It was during the period of about one hundred fifty years, extending from the middle of the twelfth to the close of the thirteenth century, that the features of our modern civilization began to assume a recognizable form. The age was characterized by the decline of feudalism, and by the growth of all the new influences which combined to create a new state of society.

With the decay of the great lords came the rise of the great cities, the increased power and importance of the middle classes, the burghers or "citizens," who dominate the world to-day. In opposition to these there came also an unforeseen accession of strength to kings. The boundaries of modern states grew more clearly defined; modern nationalities were distinctly established; Europe assumed something of the outline, something of the social character, which she still retains.

The period includes not only the culmination and close of the crusading fervor, but also, coincident with this, the culmination of both the religious and the temporal powers of the popes, and the scarce recognized beginning of their decline. Universities, vaguely existent before, now increase rapidly in numbers and importance, receive definite outlines and foundations, and exert a mighty influence. In fact it has been not inaptly said that the rule of mediæval Europe was divided amid three powers—the emperor, the pope, and the University of Paris. Books, from which we can trace the history of the time, become as numerous as before they had been scant and vague and misleading. Thought reveals itself struggling everywhere for expression, displayed at times in the sunshine of song and rhyme and merry laughter, at times in the storms of philosophic dispute and religious persecution.

In short, this was an age of strife between old ways and new. It saw the granting of Magna Charta, but it saw also the establishment of the Inquisition, and the creation of the two great monastic orders, whose opposing methods, the Dominicans ruling by fear and the Franciscans by love, are typical of the contrasting spirits of the time. It was the age which in the next century under Dante's influence was to burst into blossom as the Renaissance.

Not often has one man proven influential enough to dominate and alter the direction of his epoch; but very frequently we see one taking advantage of its tendencies and so managing these, so directing them, that he seems almost to create his surroundings, and becomes to all men the expression and example of his times. Such a leader was the emperor Frederick Barbarossa (1152-1190), and we may follow his fortunes in tracing the early part of this era.

The First Crusade had depleted Europe of half a million fighting men. Then came a pause of fifty years, after which it was learned that Jerusalem was again in danger of falling into the hands of the Mahometans. So, in 1147, another vast crusading army set out to the rescue. Barbarossa himself went with this Second Crusade, as a young German noble....