The Great Events by Famous Historians, Volume 05 (From Charlemagne to Frederick Barbarossa) 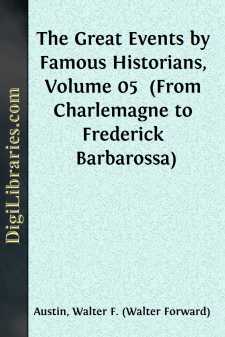 Add to My Favorites
Published: 10 years ago
Downloads: 92
Rating: (0 Votes)

AN OUTLINE NARRATIVE TRACING BRIEFLY THE CAUSES, CONNECTIONS, AND CONSEQUENCES OF THE GREAT EVENTS (FROM CHARLEMAGNE TO FREDERICK BARBAROSSA) CHARLES F. HORNE

The three centuries which follow the downfall of the empire of Charlemagne laid the foundations of modern Europe, and made of it a world wholly different, politically, socially, and religiously, from that which had preceded it. In the careers of Greece and Rome we saw exemplified the results of two sharply opposing tendencies of the Aryan mind, the one toward individualism and separation, the other toward self-subordination and union.

In the time of Charlemagne's splendid successes it appeared settled that the second of these tendencies was to guide the Teutonic Aryans, that the Europe of the future was to be a single empire, ever pushing out its borders as Rome had done, ever subduing its weaker neighbors, until the "Teutonic peace" should be substituted for the shattered "Roman peace," soldiers should be needed only for the duties of police, and a whole civilized world again obey the rule of a single man.

Instead of this, the race has since followed a destiny of separation. Europe is divided into many countries, each of them a vast camp bristling with armies and arsenals. Civilization has continued hag-ridden by war even to our own day, and, during at least seven hundred of the years that followed Charlemagne, mankind made no greater progress in the arts and sciences than the ancients had sometimes achieved in a single century. We do indeed believe that at last we have entered on an age of rapid advance, that individualism has justified itself. The wider personal liberty of to-day is worth all that the race has suffered for it. Yet the retardation of wellnigh a thousand years has surely been a giant price to pay.

This mighty change in the course of Teutonic destiny, this breakdown of the Frankish empire, was wrought by two destroying forces, one from within, one from without. From within came the insubordination, the still savage love of combat, the natural turbulence of the race. It is conceivable that, had Charlemagne been followed on the throne by a son and then a grandson as mighty as he and his immediate ancestors, the course of the whole broad earth would have been altered. The Franks would have grown accustomed to obey; further conquest abroad would have insured peace at home; the imperial power would have become strong as in Roman days, when the most feeble emperors could not be shaken. But the descendants of Charlemagne sank into a decline. He himself had directed the fighting energy of the Franks against foreign enemies. His son and successor had no taste for war, and so allowed his idle subjects time to quarrel with him and with one another. The next generation, under the grandsons of Charlemagne, devoted their entire lives to repeated and furious civil wars, in which the empire fell apart, the flower of the Frankish race perished, and the strength of its dominion was sapped to nothingness.[]

There were three of these grandsons, and, when their struggle had left them thoroughly exhausted, they divided the empire into three....