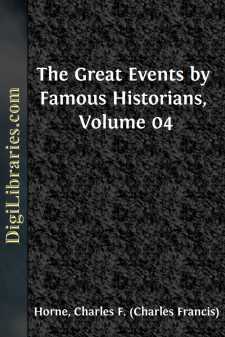 Our modern civilization is built up on three great corner-stones, three inestimably valuable heritages from the past. The Græco-Roman civilization gave us our arts and our philosophies, the bases of intellectual power. The Hebrews bequeathed to us the religious idea, which has saved man from despair, has been the potent stimulus to two thousand years of endurance and hope. The Teutons gave us a healthy, sturdy, uncontaminated physique, honest bodies and clean minds, the lack of which had made further progress impossible to the ancient world.

This last is what made necessary the barbarian overthrow of Rome, if the world was still to advance. The slowly progressing knowledge of the arts and handicrafts which we have seen passed down from Egypt to Babylonia, to Persia, Greece, and Rome, had not been acquired without heavy loss. The system of slavery which allowed the few to think, while the many were constrained to toil as beasts, had eaten like a canker into the heart of society. The Roman world was repeating the oft-told tale of the past, and sinking into the lifeless formalism of which Egypt was the type. Man had become wise, but worthless.

As though on purpose to prove to future generations how utterly worthless, the Roman civilization was allowed to continue uninterrupted in one unneeded corner of its former domains. For over a thousand years the successors of Theodosius and of Constantine held unbroken sway in the capital which the latter had founded. They only succeeded in emphasizing how futile their culture had become.

The entire ten centuries that followed the overthrow of Rome have long been spoken of as the "Dark Ages," but, considering how infinitely darker those same ages must have become without the intervention of the Teutons, present criticism begins to protest against the term. All that was lost with the ancient world was something of intellectual keenness, something of artistic culture, quickly regained when man was once more ripe for them. What the Teutons had to offer of infinitely greater worth, what they had developed in their cold, northern forests, was their sense of liberty and equality, their love of honesty, their respect for womankind. It is not too much to say that, without these, any higher progress was, and always will be, impossible.

In short, the Roman and Grecian races had become impotent and decrepit. The high destiny of man lay not with them, but with the younger race, for whom all earlier civilizations had but prepared the way.

Who were these Teutons? Rome knew them only vaguely as wild tribes dwelling in the gloom of the great forest wilderness. In reality they were but the vanguard of vast races of human beings who through ages had been slowly populating all Eastern Europe and Northern Asia. Beyond the Teutons were other Aryans, the Slavs. Beyond these were vague non-Aryan races like the Huns, content to direct their careers of slaughter against one another, and only occasionally and for a moment flaring with red-fire beacons of ruin along the edge of the Aryan world....