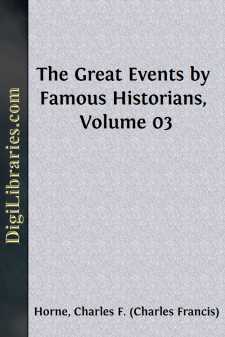 THE GREAT EVENTS (THE PERIOD OF THE ROMAN EMPIRE) CHARLES F. HORNE

So vast and wonderful a construction was the Roman world, so different from our own, that we are apt to imagine it as an arrangement far more deliberately planned, far more mechanically complete, than it appeared to its own inhabitants.

From a cursory glance, we may carry away wholly mistaken conceptions of its thought and purpose. Thus, for instance, the Roman Republic never assumed the definite design of conquering the world; its people had only the vaguest conception of whither the world might extend. They merely quarrelled with their neighbors, defeated and then annexed them.

At almost any time after Hannibal's death, Rome might have marched her legions, practically unopposed, over all the lands within her reach. Yet she permitted a century and a half to elapse ere Pompey asserted her sovereignty over Asia. It was left for Augustus to take the final step, and, by absorbing Egypt, make his country become in name what it had long been in fact, the ruler of the civilized world.

Thus, too, we think of Augustus as a kindly despot, supreme, and governed only by his own will. But his compatriots looked on him as simply the chief citizen of their republic. They considered that of their own free will, to escape the dangers of further civil war, they had chosen to confer upon one man, eminently "safe and sane," all the high offices whose holders had previously battled against one another. So Augustus was Emperor or Imperator, which meant no more than general of the armies of the Republic; he was Consul, or chief civil administrator of the Republic; he was Pontifex Maximus, high-priest of the Republic. He could have had more titles and offices still if he would have accepted them from an obsequious senate.

But the title of "king," so obnoxious to Roman taste, Augustus never sought, nor did his successors, who were in turn appointed to all his offices. For nearly three centuries after the one-man power had become absolute, Rome continued to call itself a republic, to go through forms of election and ceremonial, which grew ever more and more meaningless and trivial.

Augustus seems to have felt the tremendous weight of his position, and to have tried honestly to divide his authority. He invested the trembling senate with both power and responsibility. In theory, it became as influential as he. But the appointment of its members, and also the supreme control of the armies, remained always with the Imperator; and thus the senate continued in reality little better than a flickering shadow. Under the reign of a well-meaning emperor, it loomed large, and often dilated into a very valuable and honorable body. In the grip of a tyrant, it sank at once to its true aspect of helpless and obsequious submission.

To the outside world the reign of the emperors was welcome. The provinces were governed by salaried officials, whose conduct was seriously investigated. The hideous extortions and cruelties of the governors sent out in the earlier days of the Republic almost disappeared....