The Great Events by Famous Historians, Volume 02 (From the Rise of Greece to the Christian Era) 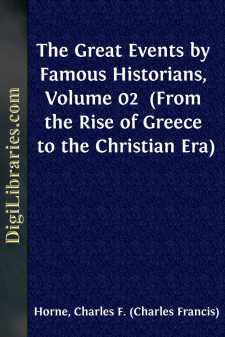 That great writer of the history of the Romans, Thomas Arnold, says of the defeat of the Athenian fleet at Syracuse: "The Romans knew not, and could not know, how deeply the greatness of their own posterity, and the fate of the whole western world, were involved in the destruction of the fleet of Athens in the harbor of Syracuse. Had that great expedition proved victorious, the energies of Greece during the next eventful century would have found their field in the West no less than in the East; Greece, and not Rome; might have conquered Carthage; Greek instead of Latin might have been at this day the principal element of the language of Spain, of France, and of Italy; and the laws of Athens, rather than of Rome, might be the foundation of the law of the civilized world."

The foregoing, the author's own selection, really sums up all that need be said as to the importance of the great event so finely treated by Creasy.

Few cities have undergone more memorable sieges during ancient and mediaeval times than has the city of Syracuse. Athenian, Carthaginian, Roman, Vandal, Byzantine, Saracen, and Norman have in turns beleaguered her walls; and the resistance which she successfully opposed to some of her early assailants was of the deepest importance, not only to the fortunes of the generations then in being, but to all the subsequent current of human events. To adopt the eloquent expressions of Arnold respecting the check which she gave to the Carthaginian arms, "Syracuse was a breakwater which God's providence raised up to protect the yet immature strength of Rome." And her triumphant repulse of the great Athenian expedition against her was of even more widespread and enduring importance. It forms a decisive epoch in the strife for universal empire, in which all the great states of antiquity successively engaged and failed.

The present city of Syracuse is a place of little or no military strength, as the fire of artillery from the neighboring heights would almost completely command it. But in ancient warfare its position, and the care bestowed on its walls, rendered it formidably strong against the means of offence which were then employed by besieging armies.

The ancient city, in its most prosperous times, was chiefly built on the knob of land which projects into the sea on the eastern coast of Sicily, between two bays; one of which, to the north, was called the Bay of Thapsus, while the southern one formed the great harbor of the city of Syracuse itself. A small island, or peninsula (for such it soon was rendered), lies at the southeastern extremity of this knob of land, stretching almost entirely across the mouth of the great harbor, and rendering it nearly land-locked. This island comprised the original settlement of the first Greek colonists from Corinth, who founded Syracuse two thousand five hundred years ago; and the modern city has shrunk again into these primary limits. But, in the fifth century before our era, the growing wealth and population of the Syracusans had led them to occupy and include within their city walls portion after portion of the mainland lying next to the little isle, so that at the time of the Athenian expedition the seaward part of the land between the two bays already spoken of was built over, and fortified from bay to bay, and constituted the larger part of Syracuse....